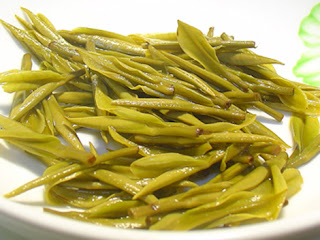 It's a genetic variation as a result of chlorophyll loss under low temperature condition and a special breed among tea plants. Because of its specificity in metabolism function, the synthesis of chlorophyll is restrained under low temperature environment, while the generation of free amino acids (FAAs) is greatly improved. Therefore, the content of FAAs in early spring white tea is generally above 6%, or even as high as 9%, while the percentage for other green tea products is 2% to 4%. The FAAs in tealeaves consists of over 20 amino acids, among which theanine occupies 50% to 60% of the total amount. Theanine is a characteristic component in tea, which is discovered in small amount in only one type of plants and animals apart from the tea.
By Explore Cultural China
at March 06, 2012