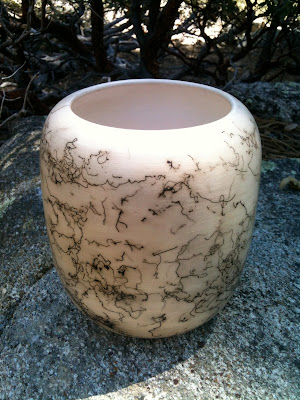 This is a horse hair style of pottery.
The decoration is done through an application of horsehair and other dry carbonaceous material to the already heated bisque pottery of 480 -700 degrees C.
This creates smoke patterns and carbon trails on the surface of the pottery.
When the object cools it leaves a trail of the carbonaceous material.
It is considered a form of Western style Raku pottery ware.
The technique uses Raku style kilns, tools and firing methods.
Although it uses a pit fired and primitive firing techniques.

This pot measures at Height 5 3/4 in x Diameter 5 1/4 in x Circumference 17 in
An excellent and beautiful piece for a Shui Fang.

Raku pottery is a 16th century pottery technique from Japan used to make Japanese tea ceremony utensils.
It is characterized by hand shaped, fairly porous vessels, which result from low firing temperatures.
In the traditional Japanese process, the pottery pieces are removed from the hot kiln, cooled in the open air or in a container filled with combustible carbonaceous material.

This particular piece of pottery was acquired in the Southwest in New Mexico.
Hand made by the local artist.
It makes an ideal Sui Fang - waste water bowl for your Chinese Gong Fu Tea setup. 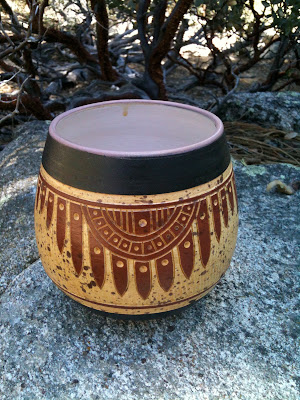 This particular piece is also from New Mexico, the Southwest of the US.
It has the following dimensions - Height 5 1/4 in x Diameter 5 1/4 in x Circumference 18 in
It makes an excellent Shui Fang as well.
The meaning of the symbols that are usually found on Native American pottery are circulars and feathers.
Circulars feathers usually mean the sun or the Creator.
The Creator or sun are usually represented in the circular design.
Feathers are symbols of prayers, marks of honor idea sources.
Their use represents the creative force and closeness to the Creator. 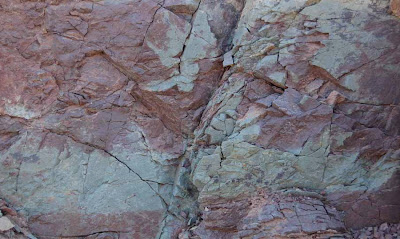 Yixing clay is often used as an umbrella term to describe several distinct types of clay used to make stoneware.
Purple Sand clay is made from Yixing clay.
This traditional style was commonly used to brew tea in China.
It dates back to the 15th century.
Archaeological excavations have revealed that as early as the Song Dynasty - 10th century, potters near Yixing were using local "zisha" clay to make utensils that could have functioned as teapots.
The late Ming Dynasty author Zhou Gaoqi stated that during the reign of the Zhengde Emperor (1502–1521) a monk from Jinsha Temple - Golden Sand Temple in Yixing handcrafted a fine quality teapot from local clay.
These fine quality teapots soon became popular among the scholarly class, and the fame of Yixing teapots began to spread. 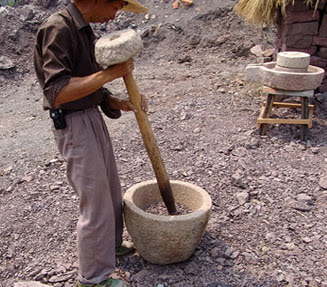 Yíxīng teapots are actually made in Dīngshān.
Also known as Dingshu, which falls within the administrative area of Yixing.
Hundreds of teapot shops line the edges of the town's crowded streets and it is a popular tourist destination.
Dīngshān is home to dozens of ceramics factories, Yíxīng Zǐshā Factory Number 1, which opened in 1958, processes a large part of the clay used in the region, produces fine pottery ware, and has a large commercial showroom. 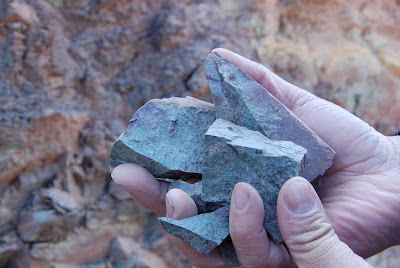 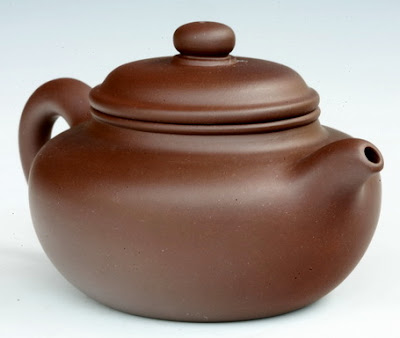 See Following:
Media exposure beauty purple pot purple clay liner is made ​​with the Land and, in order to make it close to purple in color, many manufacturers add iron Pink, manganese dioxide and other chemicals for dyeing, at the same time being there are nine positive brand exposure . A time to have purple pot shelves. May 26 afternoon, the reporter deliberately visited Jinan Suning, Gome, triple trading company, several large supermarkets and stores more information about the handling of purple pot. Jinan, the survey found that all of America, nine Yang Yixing pot can be fully refunded ( March 10, 2011 05:40:48 Source: Purple House Editor: Zi Yan) 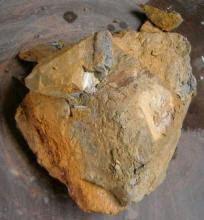 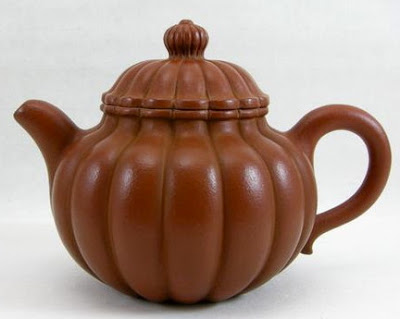 Basic components in this clay include aluminum, calcium and quartz.
The most interesting component of Zhu Ni clay is that it contains high concentration of iron.
The iron component in Zhu Ni clay is so high which is why Zhu Ni pots are usually red.
The Zhu Ni teapots are small and thin.
The pots have a shorter heat storage capacity.
The heat within the pot will dissipate easily.
Due to the clay, the body of the pot will interact and respond
to the external environment and temperature.
This causes an organic response with the tea, which can and will yield a better aroma and fragrance. The tea will have a smooth flavor.
A Zhu Ni clay teapot requires frequent and consistent use.
The clay has a tendency to dry out and shrink when not used.
When a Zhu Ni clay teapot is being used again after a long storage it is recommended to re-season the clay.
DO NOT POUR HOT WATER DIRECTLY INTO THE POT!
The pot will crack if hot water is poured directly into it.
The correct method is to cover the lid of the pot and allow warm water to wash down from the lid to the body of the pot.
This will warm the pot and reduce the temperature between the pot and the boiled water.
After repeating this process for one or two times, you will be able to put brew tea and pour the water directly into the pot.
This will prevent the teapot from cracking since the pot has already been warmed up and can endure higher temperatures. 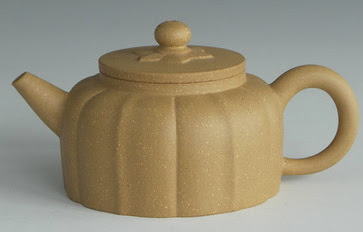 Ben Shan Lu Ni is formed within the layers of the purple clay
of the Huang Long Mountain rock formation.
The ancient name is known as the Li Pi clay Pear Skin clay or the Dragon Tendons.
This clay is scarce and rare.
The difficulty in mining and sourcing the clay makes it scarce and rare.
It is generally beige after firing.
The combination of Ben Shan Lu Ni and purple clay is used to produce Duan Ni.
This clay requires very high firing temperatures.
It is a difficult process in comparison to the production of other types of clay teapots. 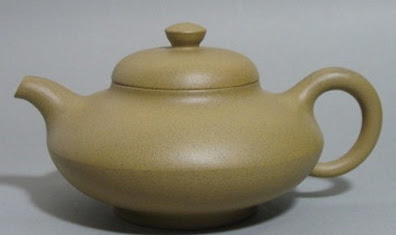 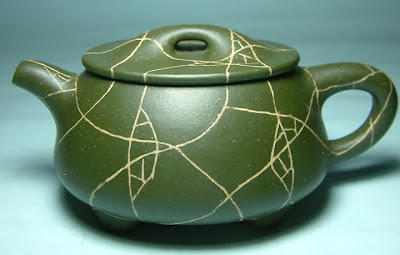 Sesame Duan is completely opposite to Ben Shan Lu Ni in terms of layers.
Its base color is partial white, slightly dull with black and reddish particles.
The lack of white particles and the contrast in color makes
these black and reddish particles quite prominent.
When compared with Ben Shan Lu Ni clay it is as if having colored dots all over this thin layer of dull white chiffon clay.
From the density of the dark particles, it is clear that
Sesame Duan have significantly larger black particle density.
The color of Sesame Duan is highlighted and the layer of it is much clearer.
Although Sesame Duan also has white particles.
These particle numbers are small and visibility is low.
On the whole the color tone of Sesame Duan is cold and rigid. 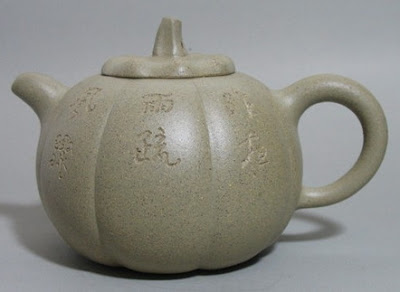 The differences between the clays are even more obvious after using the pot for brewing tea for a period of time.
Ben Shan Lu Ni will show a greenish hue.
The beige base color will become more intense, soft and moist like Jade.
In contrast, the red particles in Sesame Duan will become dark red.
If the pot is used to brew Puer Tea the patina will increase and intensify.
Long term brewing with Pure turns the pot to grow in reddish color.
Ben Shan Lu Ni feels smooth before and even after brewing with tea.
Sesame Duan in contrast will feel rough and grainy. 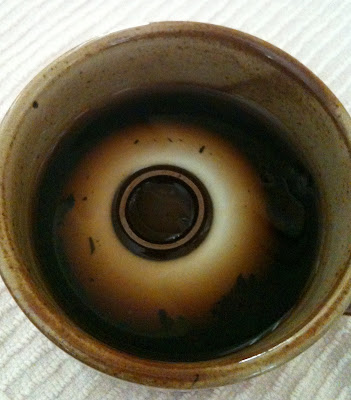 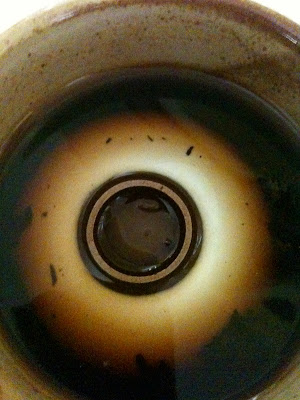 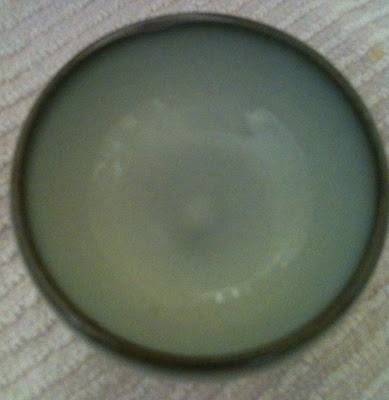 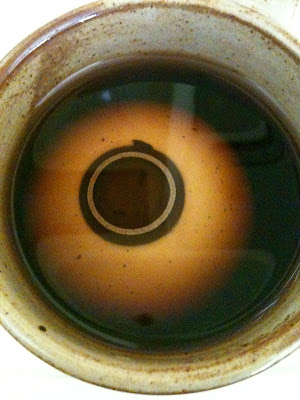 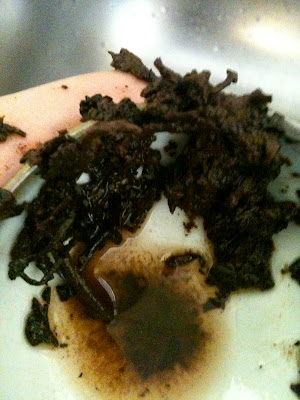 Rubbing in the tea leaves to patina the area 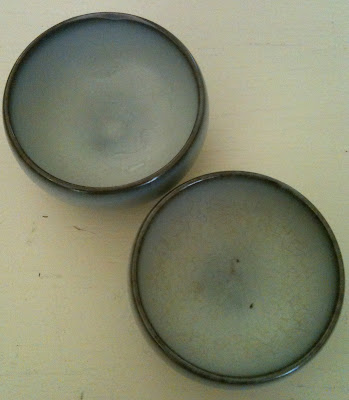 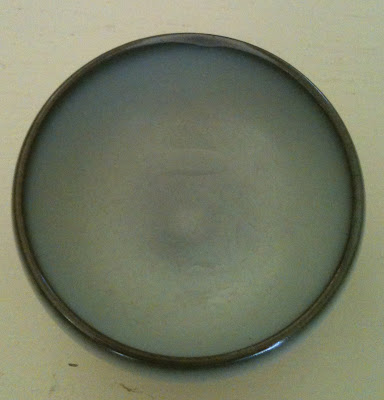 This particular cup comes with a teapot, 4 teacups, a justice pot - all made in Taiwan by a well known artisan.
It is a collector's item.
This set has travelled from Taiwan to California to Canada and back to California.
In it's last journey it encountered a slight mishap.
One of the cups chipped and the handle of the teapot broke in 2 and snapped of the body of the teapot.
The teapot is in the midst of repair - photos to follow.
This however is the repair job for the chipped teacup.
I did my best! 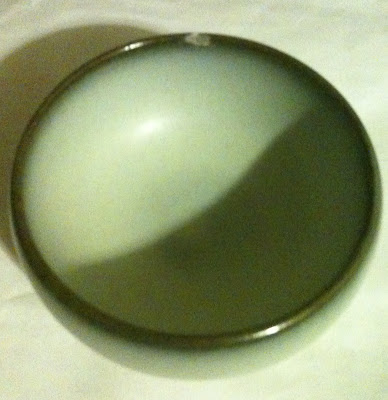 The chip at the lip of the teacup was unfortunate but this is its journey back from the Land of Broken Things. 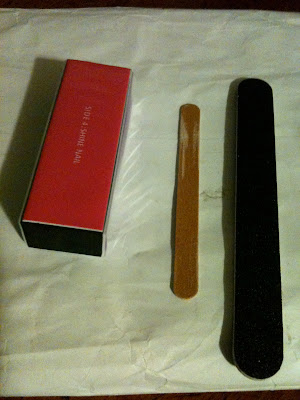 These are the tools I used.
Acquired from the manicure/pedicure section of any department store.
A coarse grit nail file, a medium grit nail file and a Buffer cube for the finishing touches. 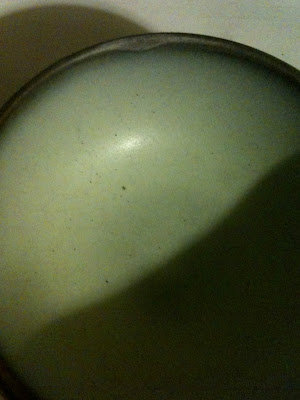 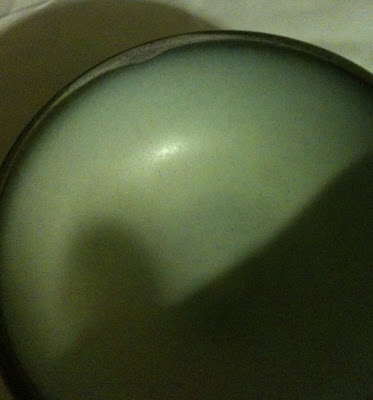 Proceeded with a coarse file on this to get the deep nicks out of the chip.
The chip in the teacup itself was rather odd - it was almost gouged. 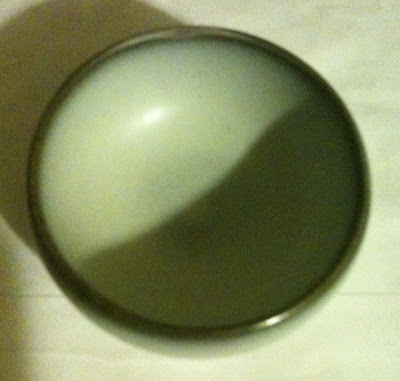 This was the finished work after filing, and buffing.
The cup is currently soaking in some strong Puer tea to create a blending into the glaze.
Since the glaze is a crackelee finish, the hope is to make the repair work disappear.
Will post finished repair when teacup is done curing.
at June 03, 2013 No comments: