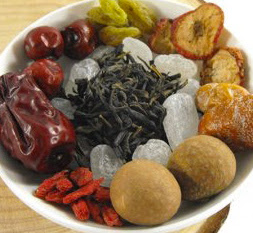 This is a traditional tisanes of the Hui and Dong Xiang people (descendants of the Monggols who converted to Islam in the 13th century)  of the Silk Road.
It was traditionally served to guests and relatives.
It is historically noted that the tisanes originated during the Tang dynasty and introduced to Northwest China during the Ming and Ching dynasty.
It is famous in Lanzhou.
Legend has it that the Empress Dowager Cixi ordered her Imperial doctors to come up with a formula  that would retain her youthfulness an maintain a cool, level head.
Her recipe was called Royal Babao Cha “Eight Treasure Tea”- Ginseng slices, Sultanas, Dried Longans, Chinese Dates, Goji, Luo Han fruit, Chrysanthemum, Rock sugar and Jasmine Green tea.

The tisanes is usually sweet, floral and has the flavor of dates.
It has health benefits such as clearing the larynx, nourishes the Yin aspects of the body, moistens the lungs, quenches thirst, nourishes the blood and energy, decreases the body's heat, nourishes the kidneys, invigorates the mind, brightens the eyes and if drank regularly can also ensure longevity and an ever youthful appearance, promotes digestion, relieves fatigue and helps to remedy heat stroke. 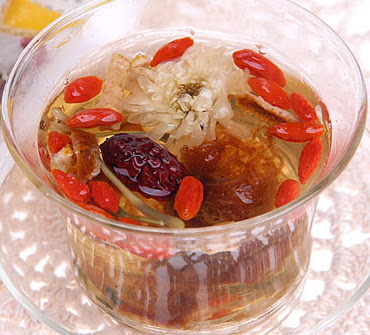 Eight treasures is usually made with rock sugar, Chinese Red Dates, walnuts, Longan, Raisins, Apricots, Apple slices, Chrysanthemum flowers, Roses, Green tea, Wolfberry, Chinese Black dates, Ginseng, Medlar Pome fruit, Orange rind, Black Sesame seeds, Luo Han Kuo, Walnuts, Peanuts, Licorice, Almonds, Honeysuckle flowers, Ginger, White Fungus and Lily Buds.
Not all recipes have Green teas part of the recipe and some only has 7 ingredients not 8.
Recipes can range regionally that use it traditionally as a health booster.
However the basics are - Chrysanthemum, Longan, Chinese Wolfberry, Chinese Red dates, dried Orange peel, Rose buds, Rock sugar and Lily Buds.
It can also be made with an aged Puer.
Astringency in a green tea enhances the sweetness of the fruits.
Using more flowers in the Ba Bao Cha and reducing the sweet ingredients will also assist in managing humidity and helps with weight loss. 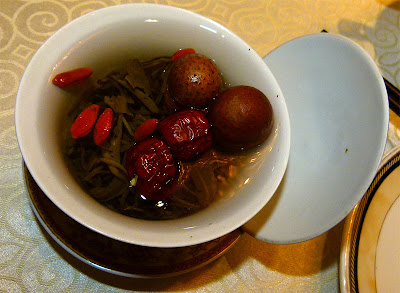 It should be served in the traditional Chinese three-piece San Pao Tai tea bowl (It means pagoda as the tea cup resemble a Chinese pagoda).
This tea bowl is also known as a Gaiwan.
The tisanes is usually steeped in the bowl and nursed several times as the flavors
change with each re-steeping.