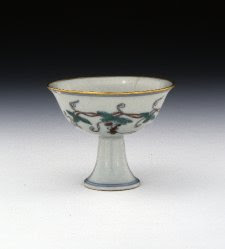 Materials
porcelain (all objects)
metal (all objects)
Techniques
doucai glazed
Production place
Made in Jingdezhen
(Asia,China,Jiangxi (province),
Jingdezhen)
Place
Found/Acquired China
(Asia,China)
Date
1573-1620 (circa)
Period/Culture
Wanli (probably) Ming dynasty
Description
Porcelain stem cup with underglaze blue and 'doucai'-style decoration and metal-bound rim. This small stem cup has a round bowl with an everted rim bound with gilt-bronze and a solid flared stem with a recessed base. Inside it is plain and outside is painted in underglaze blue with a branch of a fruiting grape vine. The rim and foot are outlined in double blue lines. Coloured overglaze enamels - green leaves, brown branches, yellow tendrils and chocolate-brown grapes - have been added for a second firing. The base carries an apocryphal six-character Chenghua reign mark in a double ring.

Dimensions
Height: 6.2 centimetres
Diameter: 8 centimetres
Curator's comments
Harrison-Hall 2001:
Wine cups of this design were first made in the fifteenth century. A genuine Chenghua mark and period cup with the same design is in the Percival David Foundation of Chinese Art, London. The British Museum cup is, however, not a Chenghua original. It has a blue-white glaze which is quite distinct from the yellow-white porcelains of the Chenghua era. In addition to this the style of painting is much suffer on the present piece than on a Chenghua original. Moreover, an original Chenghua stem cup of this quality would have been destroyed at the kiln site for being substandard, as evidenced by a similar flawed cup which was discarded in the imperial kiln Chenghua period waste heap at Jingdezhen and was excavated there recently.
Chenghua porcelains were already collector's items in the Wanli period, approximately one hundred years after their manufacture. Ts'ai Ho-pi has gathered together several commentaries on these porcelains from the Wanli period. For example, the connoisseur and scholar Zhang Yingwen (fl. 1530-94), author of "Qing Mi Cang", wrote: 'There are also... Chenghua wucai grape cups... which are worth having....' And Shen Defu (1578-1642) recorded in the "Wanli Ye Huo Bian": '... but today Chenghua wares have become expensive, surpassing those of Xuande....' Some imitation Chenghua 'doucai' bear later Ming reign marks, while others imitate the original Chenghua mark.