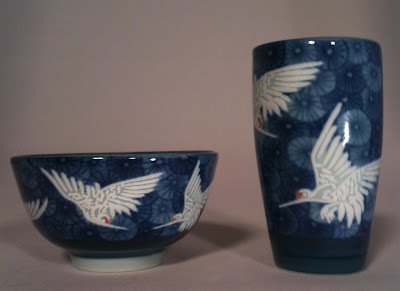 Scented cups are among one of the many unique tea implements in the Gong Fu Cha Dao practice.
The cup itself is not for drinking out of but used in the tea tasting/testing aspect of the Gong Fu Cha Dao practice.
The design of the cup is tall and narrow when compared to the tasting or drinking cups.
The call for a tall cup is purely to capture the scent of the tea as well as to aerate the tea when it is poured out of the scented cup into the actual teacup.
Aerating the tea the steeped tea awakens the favors and scent of the tea further. 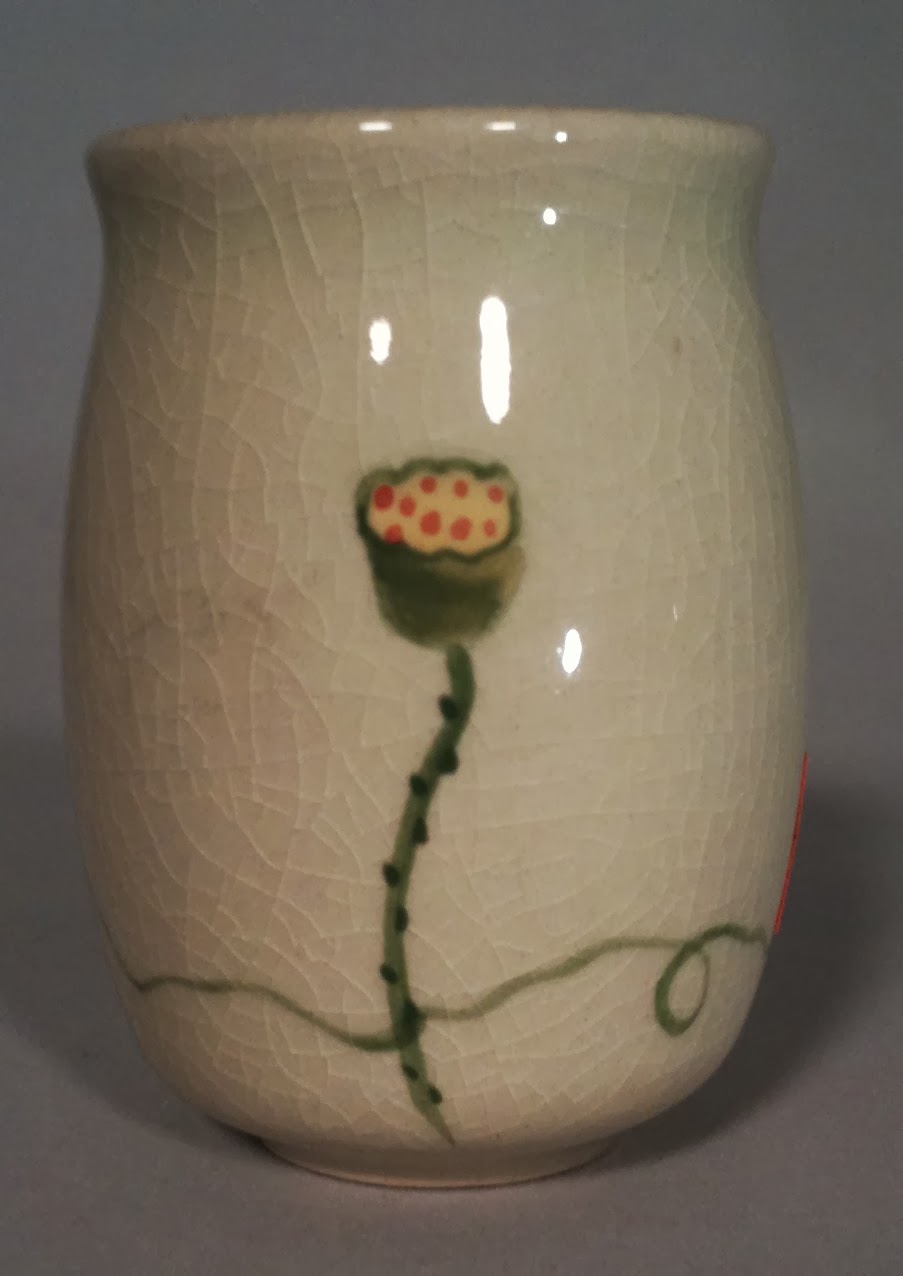 Scented cups are sometimes also known as aroma cups, snifter cups or fragrance cups.
The first infusion of tea steeped is called the "infusion of the good smell."
The scented cup or snifter cup always goes along with the 1/2 oz drinking cup. 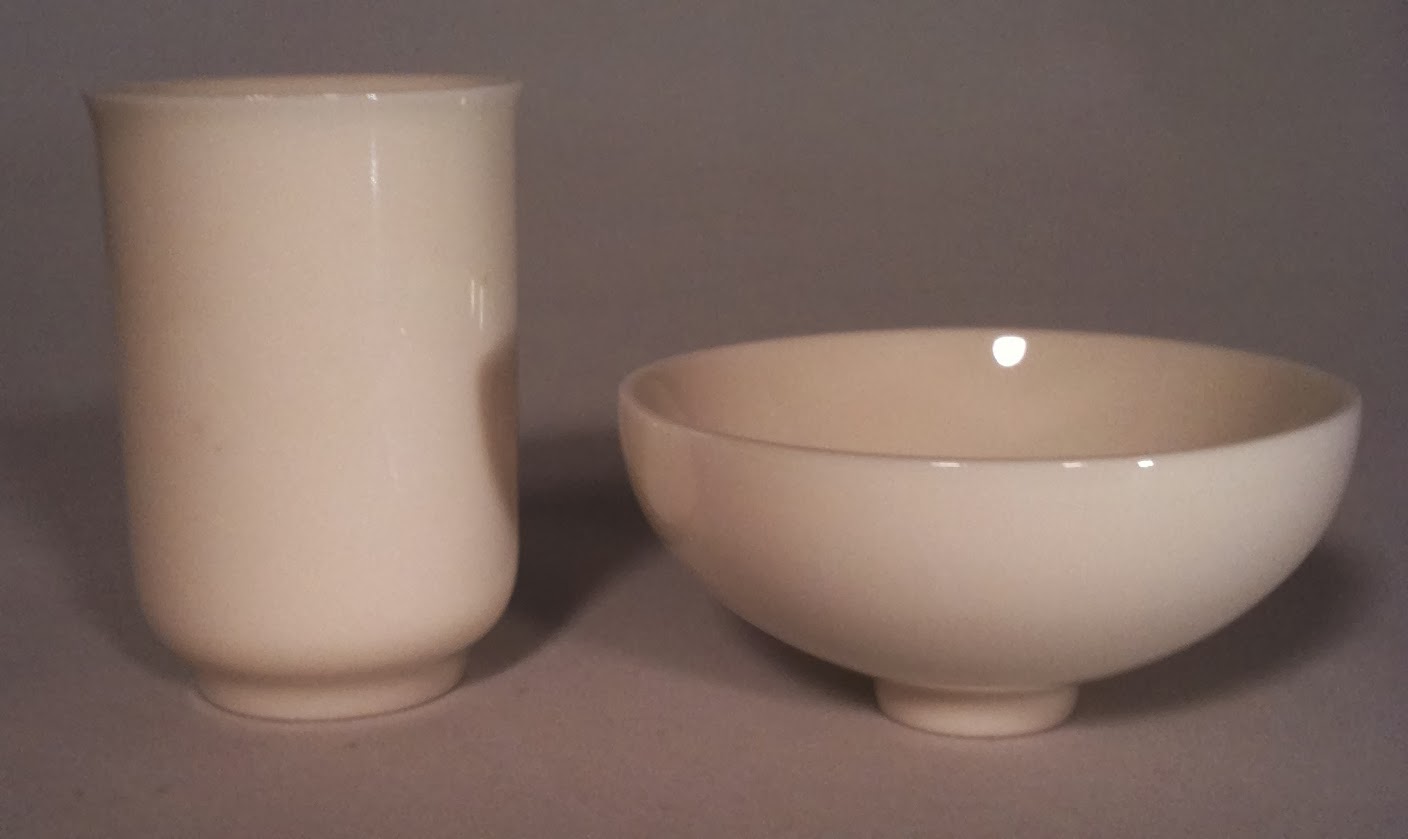 The tea is initially poured into the scented cup.
Then from here into the drinking cup.
The empty scented cup is then lifted between the palms of hands and gently rolled, to stimulate and activate  the residual scent of the tea.
It is then held under one’s nose while gently inhaling the escaping fragrance.
More often than not to intensify the scent emitted by the snifter cup, it is pre-scented.
This is done by pouring the first wash of tea into the scented cups.
The tea is often poured to the brim almost overflowing into the scented cup. 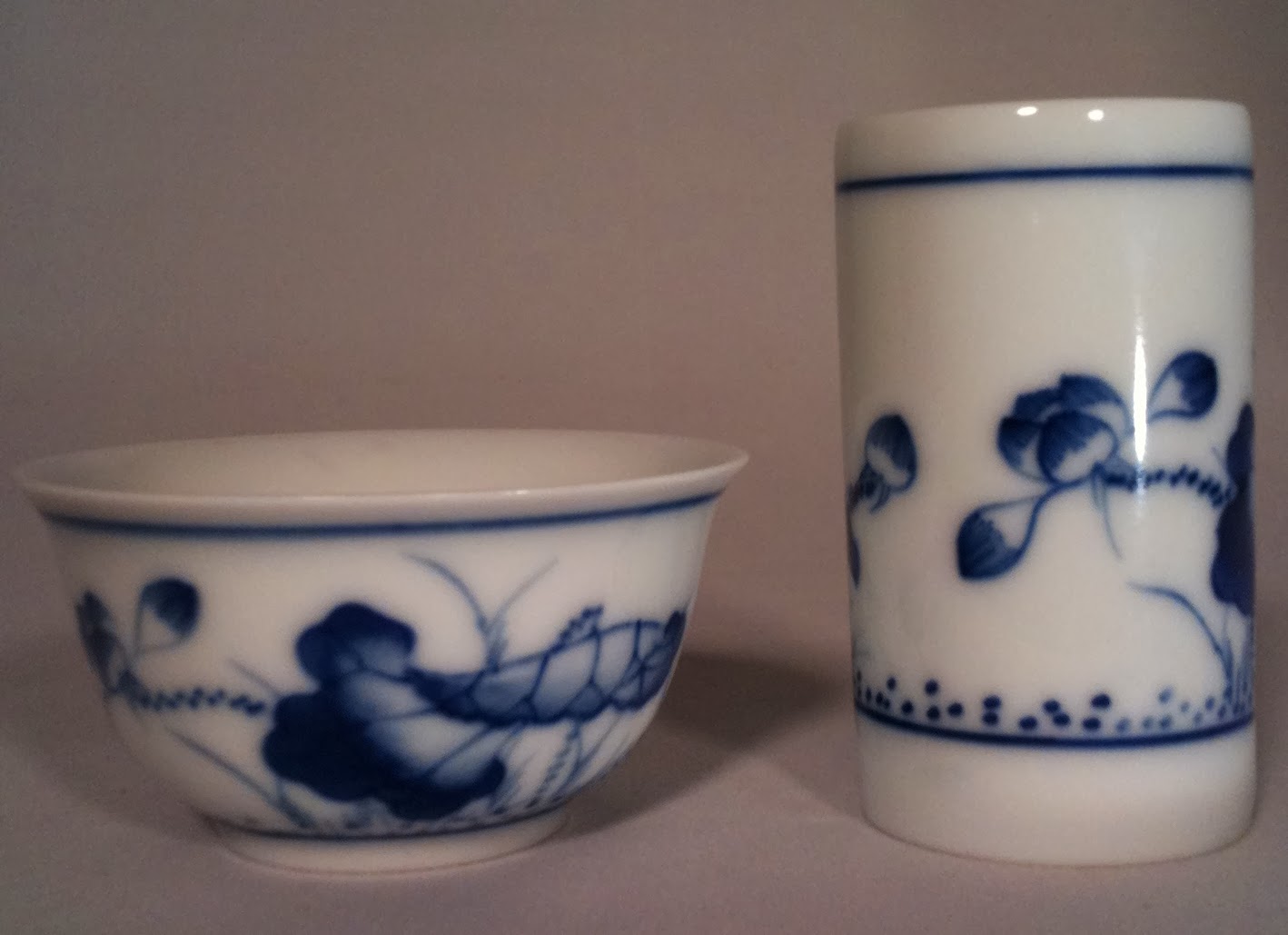 Drinking cups and scented cups are usually available as complementary sets.
However, the scented cups are often sold singularly and comes in porcelain white.
This is for the viewing of the the color of the tea in as much as to experience the fragrance of the tea. 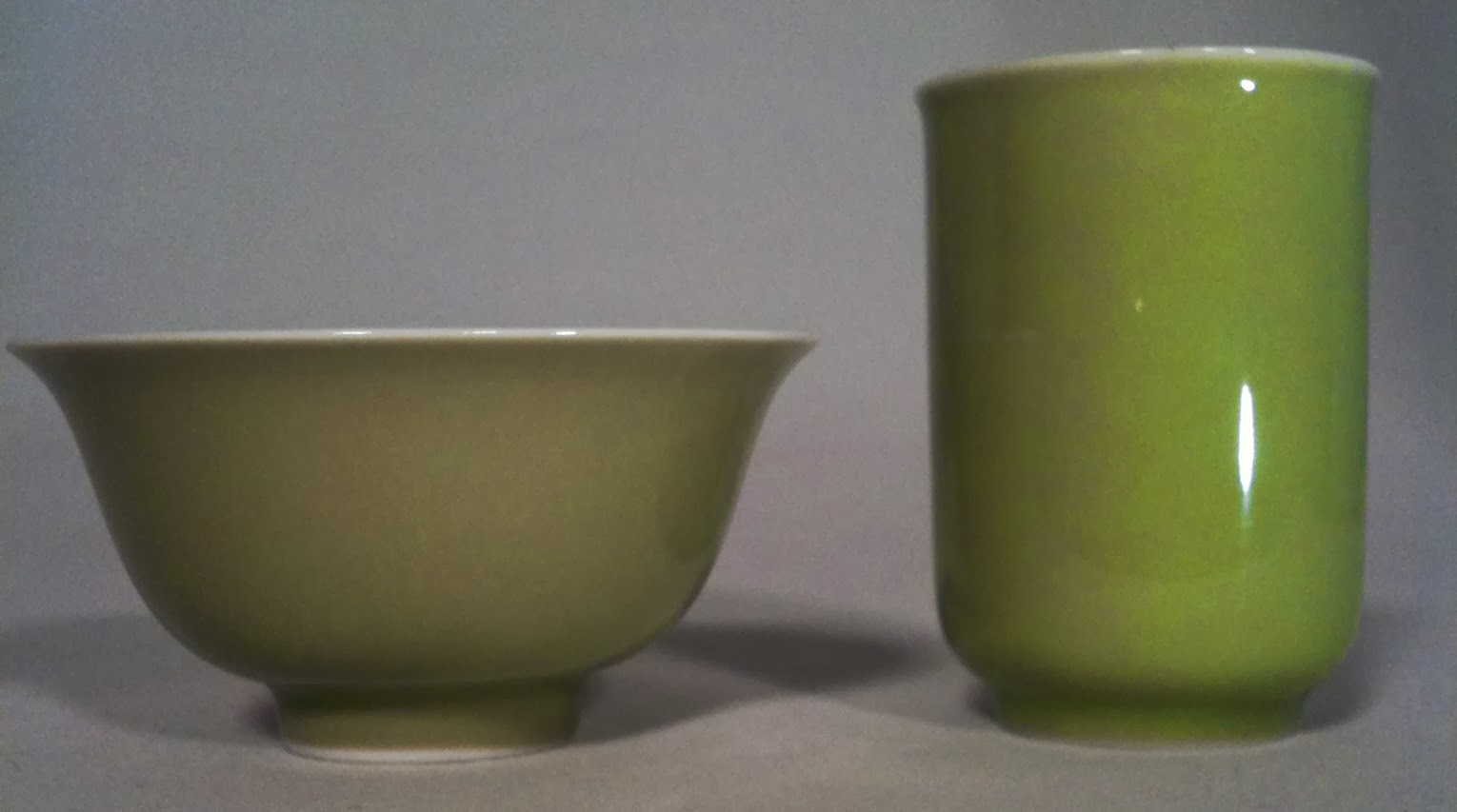 During the Chinese Cultural Revolution - fall of 1966, the PRC went through a culture purge.
The core of the idea was to have a utopic society rise like a Phoenix from the ashes of the old society.
Old habits, manners, customs and culture of the past was to be fully eradicated - the PRC wanted to wipe out the history of old China.
Much of ancient China's relics, traditional objects, books and intellectual property were sacrificed to the Red Guards.
Taiwan became the guardian of Chinese Culture in this carnage.
She became a great cultural influence to the PRC who were looking at restoration of their culture.
Taiwan also played a major development in the restoration of Chinese tea culture in the 1970's. 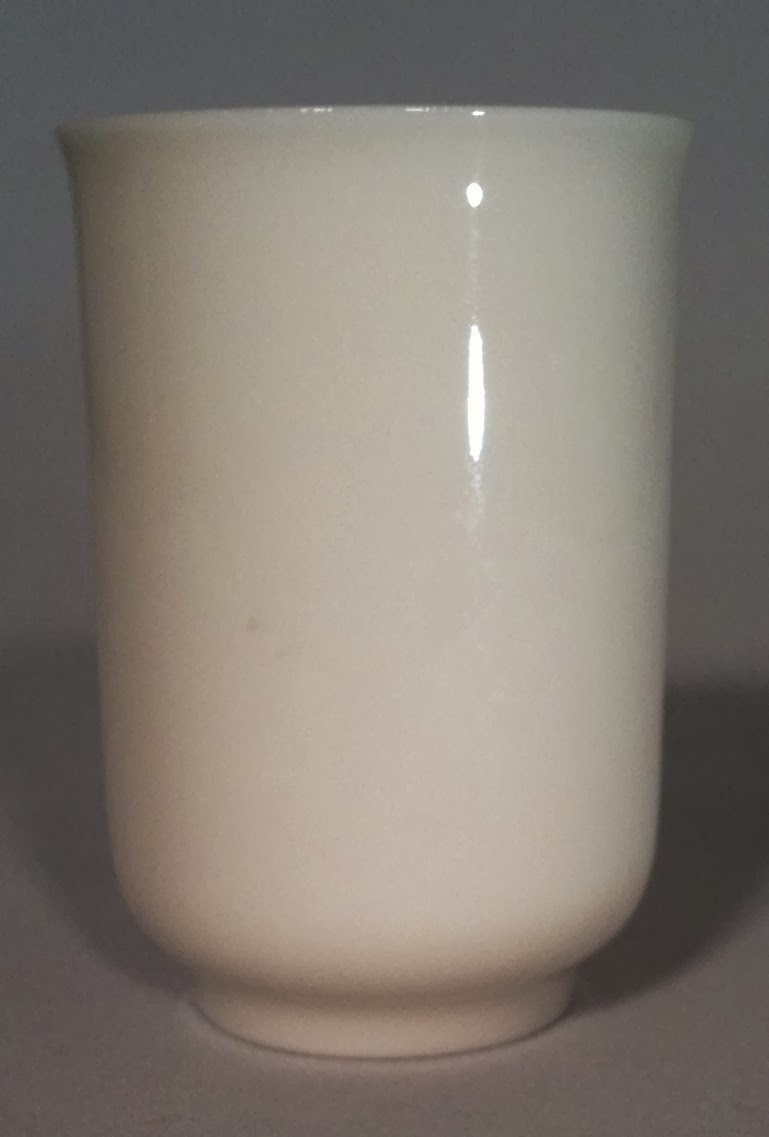 The introduction of the of the aroma cup was purely a Taiwanese modification to the Gong Fu Cha Dao.
Introduced in the 1980's as part of a traditional tea set up.
It was coined as wenxiangbei 聞香杯 - the aroma cup.
Elongated and intended purely to accentuate the fragrance of the tea being served and then used to transfer the served liquid into the drinker's own teacup.
The entire idea was to create an experience for the drinker - the intense fragrance emitted from the residual liquor that clung to the inner surface of the cup.
It became the an important implement as part of the Gong Fu Cha Dao setup - a classic tea ware for the tea connoisseur. 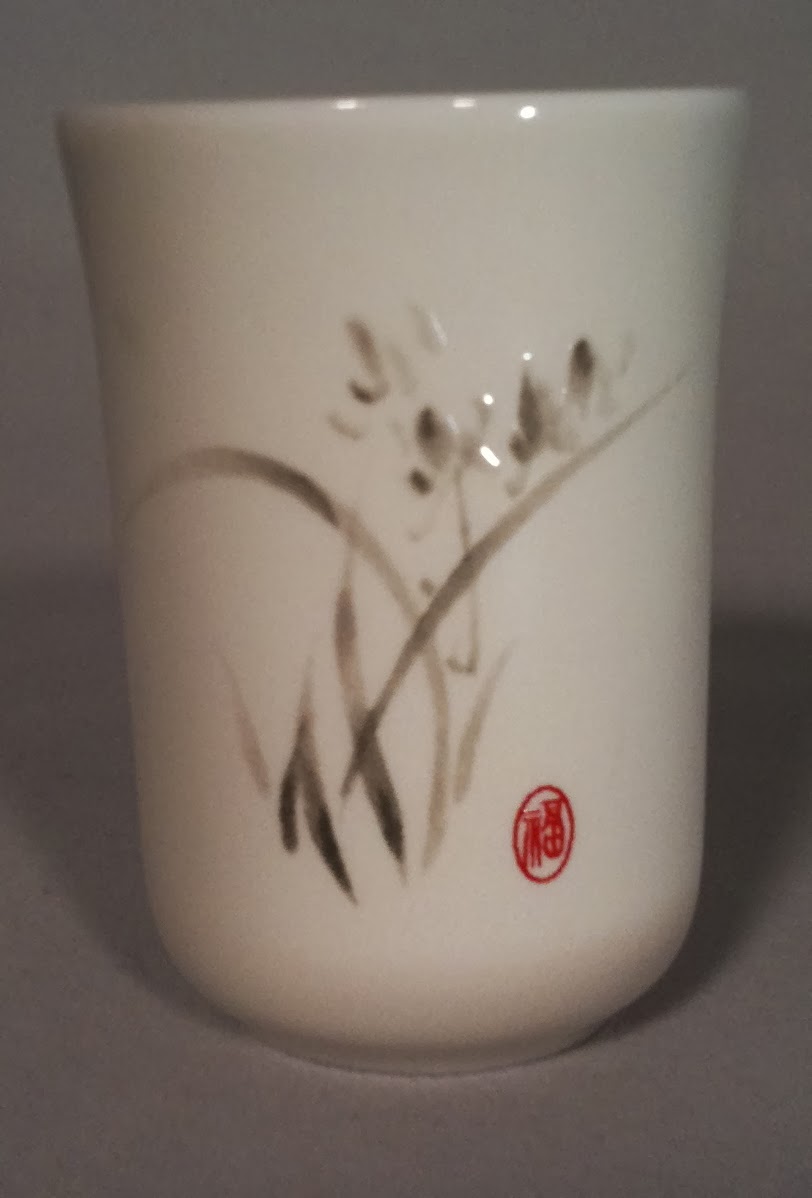 
A Quintessential Invention : Genesis of a Cultural Orthodoxy in East Asian Tea Appreciation