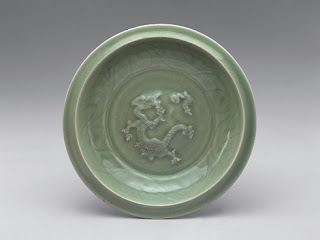 The porcelain of Longquan ware represented a great school of southern celadon that arose in the Song Dynasty (960-1279). It was manufactured in fairly vast areas in the southwestern part of East China's Zhejiang Province. The sites of former celadon kilns and workshops are found throughout the counties of Lishui, Suichang, Yuehe, Qingtian, and Longquan on the upper Oujiang River, with Longquan as the production center. There were also many kiln sites in Pucheng along the Songxi River in the northern part of East China's Fujian Province. 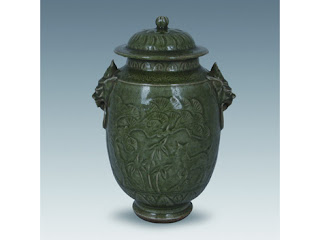 Since Longquan County was under the administration of Chuzhou, some records referred to Longquan kilns as Chuzhou kilns, and Longquan celadon as Chu ware. The region was rich in materials for porcelain manufacture: good-quality porcelain clay; purplish gold earth containing metal ore for preparing glaze ingredients; inexhaustible pine firewood; and plenty of water from the many rivers.
Despite mountainous barriers, the Oujiang River was navigable throughout the year, crossing Lishui and Qingtian to Wenzhou and Yongjia to reach the sea. Longquan celadon made rapid progress in the Song Dynasty due to its close contacts with commercial cities and towns as well as with foreign trade. It had a good market in different parts of China and dozens of other countries and regions. 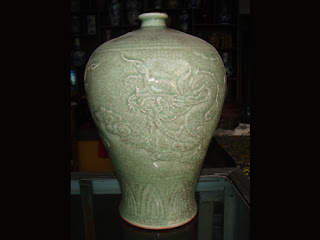 Archaeological workers investigating Longquan celadon producing areas discovered the sites of 300-plus porcelain kilns and workshops. The center of ancient Longquan porcelain was around Dayao in Liutian Town, where the workers made scientific excavations at selected spots. During the Song Dynasty, the "dragon" kilns, 50 to 80 meters long, yielded close to 10,000 bowls and other vessels at one firing.
Liutian Town reportedly had 72 kilns in full-time operation, indicating a flourishing porcelain trade. Unearthed were simple and crude rectangular workshops, large and small brick-covered grounds for washing raw materials, and many hard stone pestles (club-shaped instrument) and iron implements for pounding china stone, as well as rectangular earthen ovens. In addition, the remains of potters' huts were found in the living quarters. 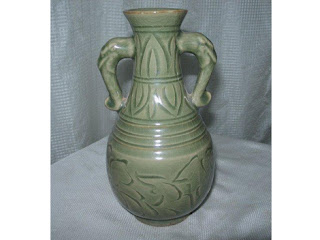 The finds at the excavations show that manufacture of Longquan ware celadon started on a small scale in the Northern Song Dynasty (960-1127). The vessel shapes and glaze colors at this initial stage show this celadon followed the tradition of the Yue ware celadon in the Tang Dynasty (618-907) and the Five Dynasties and Ten Kingdoms Period (907-960).
Influenced by Yue celadon technology, Longquan celadon developed in the Northern Song Dynasty. The representative works at the time were double-handled ewers (large wide-mouthed water jugs) with covers, ewers with multiple spouts, vases with blossoms, and bowls, all bearing stamps indicating their manufacture in 1080. Longquan celadon excelled after the Southern Song Dynasty.
Longquan ware was also called Di (younger brother) ware. It was said that two brothers, the elder named Zhang Sheng the First, and the younger Zhang Sheng the Second, were skilled at porcelain making, with their wares being greatly acclaimed among the people.
The Annals of Chuzhou Prefecture states: "Zhang Sheng the Second directed Liutian kiln. We do not know when he lived. All vessels from Zhang Sheng the Second's kiln were remarkably blue and transparent, without blemish and like fine jade. A single vase or bowl often cost more than ten taels (approximately 12 ounces) of silver."
Of Chinese southern celadon, Southern Song Longquan ware boasted the best craftsmanship. Blue-green glaze was of many varieties, the best being kingfisher green, powder blue, and plum green. The paste was white with a blue tinge, fine, compact, and durable. The main vessel shapes were bowls, plates, shallow basins, vases, jars, and alms bowls.
By Explore Cultural China
at September 03, 2012