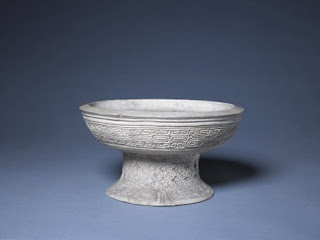 White pottery is a kind of pottery whose outside and inside are all white. The greenware is mostly made by hand. It uses porcelain clay or kaolinite, which contain less iron than figuline, and is fired at a temperature of about 1000 ℃. In the late Shang Dynasty (13th century - 11th century BC), the emergence and application of white pottery with carved patterns marked the new achievement in the history of Chinese pottery. The hardness, fire resistance and water-absorbing capacity saw much improvement, so we consider the white pottery the indication of the leap from pottery to China. 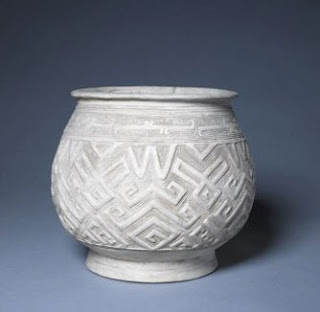 A white pottery vase with geometrical patterns of the Shang Dynasty was excavated from the Yin Ruins in Anyang of Henan Province, and it is the representative of white pottery with carved patterns in the Shang Dynasty. It is 20 centimeters tall in total with a caliber of 18.5 centimeters, and was made by imitating the pattern of bronze ware. The body of the vase is spherical, the mouth becomes narrow, and the pitch at the shoulder part is large. The bottom is round with a ring foot. The whole work looks rounded and stately. The body of the vase is covered with patterns. The main patterns in rilievi and the detailed shadings form a florid design. The concave and protuberant, the distant and dense patterns were naturally combined to create a clear gradation. 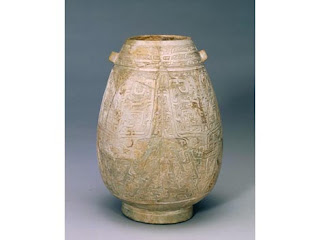 Now the vase is in the Palace Museum.
Due to the hardness, lustration, and fine craftsmanship, white potteries became the objects used exclusively by slaveholders. In the later period of the Shang Dynasty, white potteries tended to be more and more fussy and refined, so the top-notch white potteries were mostly from this period. After the Western Zhou Dynasty (11th century - 771BC), white pottery was in decline due to the emergence of hard pottery with printed patterns and primitive China. 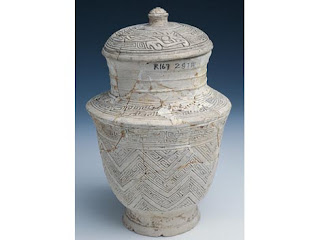 By Explore Cultural China
at September 13, 2012