What is a trembleuse cup?
A trembleuse cups is a cup that fits into an elevated rim in the center of a saucer
They were specifically designed for patients who suffered from the trembles.
They were virtually spillproof.
The cup has a molded handle.
The saucer has a wide border and has a deep inset in which a cup firmly rests.
These design elements are put in place to avoid spilling of hot liquid by a trembling hands.

Designers at King Louis XV’s porcelain manufactory in on the outskirts of Paris in 1750  began producing a type of cup for drinking milk known as the milk goblet - gobelet à lait.
They were available in two sizes.
The cups had one or two handles and a cover to keep the milk warm.
They were often decorated with country scenes and painted in pastel hues.
Some were painted in “Pompadour pink,” named after Louis XV’s mistress Madame de Pompadour. She was one of the factory’s most important patrons.
Milk goblets in the 1750s, became popular among the French nobility and the court.
They were also given away as gifts to foreign dignitaries.
In the 1700s, this double-handled cup was used to serve coffee or hot chocolate.
This was prior to the emergence of the one handled teacup and coffee cup.
When Europeans in the 1700s began to drink tea they drank out of the small handless bowls, following the Chinese and Japanese custom. 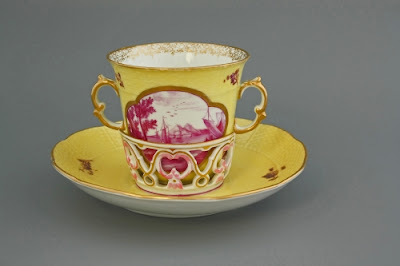 These Trembleuse cups were made at the Du Paquier porcelain manufactory.
They were tall, higher than they were wide, and was unstable.
The factory developed a Trembleuse (literally "trembling") form.
The design implemented was a raised ring or basket on the saucer held
the cup in place and prevented spillage caused by a shaky hand.
Porcelain painters often imitated engravings with black enamel decoration known as schwarzlot.
This decoration was typical of the Du Paquier factory. 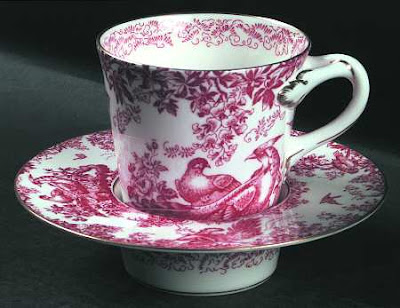 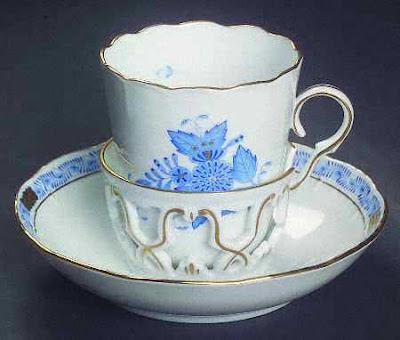 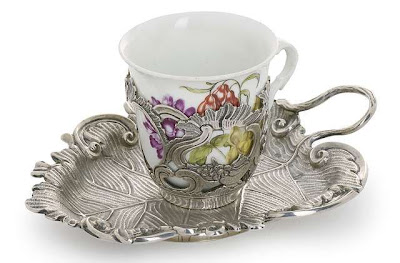