Darjeeling is the region on the southern slopes of the Himalayan Mountains in India.
It is one of the source's of the world's best tea.
Grown at extreme altitudes, on steep slopes, under intensive sunshine in a generally cool climate.
Darjeeling tea has a distinct and unique flavor. 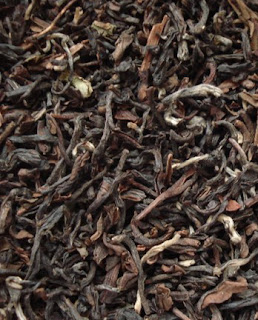 Darjeeling tea is available in black, green, white and oolong.
The brew yields a thin-bodied, light-colored infusion with a floral aroma.
The flavor can include a tinge of astringent tannic characteristics, and a musky spiciness sometimes described as muscatel.
Darjeeling teas are marketed commercially as black teas.
Almost all of them have incomplete oxidation <90%, so they are technically more oolong than black.

Unlike most Indian teas, Darjeeling is normally made from
the small-leaved Chinese variety of Camellia sinensis var. sinensis rather than the large-leaved Assam plant (C. sinensis var. assamica).
Traditionally, Darjeeling tea is made as black tea.
Darjeeling oolong and green teas are becoming more commonly produced.