Bamboo, plants are a type of grass. It is the fastest growing plant in the world. Some varieties grow at a peak rate of 5 cm (2 inches) per hour; more typical rates are 10 cm per day.
Due to their strong stems, bamboo can tower several meters.
The tallest reaching bamboo plants are about 20 meters (over 60 feet).
According to recent estimates, there are 36 bamboo forests still present in China despite intensive harvesting for centuries.
These Bamboo forests cover 4-7 million hectares (11-19 million acres) making up 3-5% of China's forests.
China has an estimated 300 species of bamboos in 39 genera. India is second to China in bamboo harvest.
Although, India has larger bamboo forests, making up nearly 13% of the country's forest area. The annual global bamboo harvest is 10 million tons, and growing. 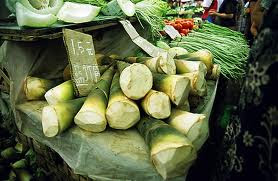 Bamboo is best known for its hard stems /culms that are used in place of wood for a variety of applications, including furniture, scaffolding, flutes, fence posts, flooring, and even bicycle frames.
Bamboos also serve as decorative plants; the tender shoots are used in Chinese and South East Asian cuisine.
Bamboo has been a primary subject of many Chinese as well as books was written on bamboo slats and bamboo has been used as a source of medicine since ancient times.

Bamboo Leaf Tisanes is an introduction from South Korean.
The tisanes are made from the leaves of young bamboo plants.
The process to make these tisanes drinkable involves roasting, steam boiling and scenting.
The introduction of bamboo tisanes is relatively new.
The first research done into Bamboo tisanes first began in 1994 at the Chonnam National University in South Korea.
Patents were granted in 2002 and production of Bamboo Leaf Tisanes started on a large scale.
These tisanes are still rather new in the US and available for purchase online.

Bamboo tisanes are rich in fiber, protein and are caffeine-free.
The Bamboo tisanes brew yields a light golden color with a faint bamboo aroma and flavor.
This beverage is very smooth.
These tisanes have the ability to re-steep at least twice without getting bitter.

Bamboo Leaf Tisanes is not to be confused with the Chinese Green Bamboo Tea – the Camellia Sinensis variety.
A monk near the top of the famous Buddhist Mountain Emei Shan first made Chinese Green Bamboo Tea.
This tea contains no bamboo.
The name was derived from the unique shaping method created by the monk.
Local government officials noticed its flat, glossy bamboo leaf shape and rich emerald color and so deemed it Green Bamboo Tea - 竹叶青绿茶 - Zhu Ye Qing.
It has a mellow taste and sweet aroma.