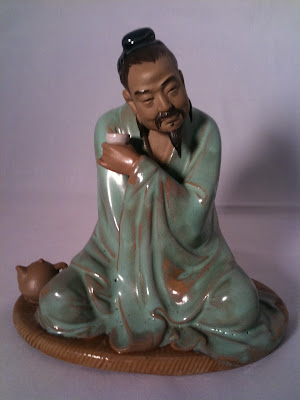 Brazier - a bronze, ceramic or clay vessel holding burning coals for heating a kettle or to cook on

He lived during the early 5th century and is traditionally credited as the transmitter of Zen Buddhism (Chinese: Chán) to China.

Shui fang/Crucible/Slop pot - for disposing tea water, tea leaves, used when tea tray is too small, in pre-Ming dynasty, it was a water container used to store unboiled water for tea.

Cha dao  茶道 (君子六件套) - tea implements consisting of typical set will include 6 items: a scoop, a pick, a pair of tongs, a funnel, a scraper and tool holder.

Chamadao - the tea and horse road

Darjeeling - a town in the state of West Bengal in India

Funnel - for channelling tea leaves into the teapot

Furogama - a Japanese brazier used in a tea ceremony

Gaiwan - A three piece porcelain set up to brew tea, consisting of a lid, handleless cup and saucer; its a covered bowl.

Gaibei - is a covered cup, smaller size than a gaiwan

Green tea - One of the 7 classifications of tea. Hishaku - bamboo water ladle

Justice cup- For equal distribution of brewed tea from the standpoint concerntration of the infusion.

Koryo- is a small Korean infuser that is made up of a cup, infuser basket, and a round saucer that doubles as a base or a lid. It is made from clay and is often glazed inside and out.

Oolong - One of the 7 classifications of tea.

Pincers - Used for removing tea sediments from the teapot.

Prefecture-level city - An urban centre with a non-rural population over 250,000 with the gross output of value of industry of 200,000,000 RMB; with the economic output of the tertiary industry superseding that of the primary industry, thereby contributing to over 35% of the GDP. Renminbi - The renminbi is the currency of the People's Republic of China. The principal unit is the yuan , subdivided into 10 jiao , each of 10 fen .

Southern Silk Road - Was a winding network/paths of mule/horse caravans going through the mountains of Yunnan Province into the Southwest of China. This, over a thousand years ago was the land trade link from the city of Chang'an (Xi'an) towards the Indian Ocean. This road is commonly known as The tea and horse road. Economic trade goods carried along this route were tea and horses, rarely silk.

Tea- A liquid infusion made from the Camellia Thea Sinensis plant.

Tea and horse road - This is also known as Chamagudao, the oldest horse caravan trade route in Asia spanning from Southwest China - Sichuan and Yunnan Provinces, running along the eastern foothills of the mountain ranges Hengduan (China's centre of tea production) crossing this mountain range and deep canyons of the Yalong and Jingsa rivers (tributeries of the upper yangtze river), the Lancang (tributary of the Mekong River), the Nu (Salween) and then spanning across the two highest plateaus Qinghai in Tibet and Yunnan-Guizhou in China, into south of the Himalayas in India.

White tea - One of the 7 classifications of tea.