The Immortal of Tea - Lu Yu (Part One) 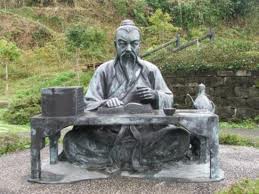 Lu Yu (733-804) was the foremost patron of tea and worshipped by tea merchants as a deity of tea however he was a mortal man that devoted his intelligence and time to the cultivation of tea knowledge and its merits. Some call him the sage of tea and some called him The Tea Immortal, he is however best known as the author of the Cha Jing or The Classics of Tea.
He was an orphan, a foundling that was adopted by a Tang dynasty Buddhist monk called Master Zhiji of the Longgai Monastery, which was in the Tianmen in the Hubei province. Lu Yu was taken care by the monk and educated in the monastery. His aptitude for the scholarly questioning got him into more trouble than the monks at the monastery could handle and Lu Yu was consequently disciplined frequently for insubordination of his elders. This created in him the persistence to question and seek knowledge outside of the monastery setting. He ran away from the monastery at the age of 12 and chanced upon a travelling performers troupe. His brilliance, witty action and humor made him a comedian in the troupe.
Lu Yu’s eloquence and education propelled him into authoring three books on comedic sketches. He became famous for his comedies and his skill at brewing tea made him many friends and brought him popularity with the Jingling province officials, which would change his life from a comedian to a learned scholar.
As fortune always favors the bold, Jingling province organized an event to formally welcome the new Governor with a performance of the troupe. The new governor Li Qiwu was so impressed by Li Yu’s performance and wit that he was invited to a private meeting with the Governor.
With time the Governor mentored Lu Yu, as he was impressed with the young man and his prowess and hunger for knowledge, that he sponsored the education of Lu Yu under an old friend and senior scholar called Zou Fuzi. Zou Fuzi was a retired, highly respected imperial court scholar who lived a solitary life. This was a rare opportunity and Lu Yu seized it and his life changed forever.