Brewing Up the Latest Tea Research 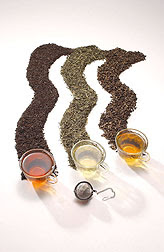 Leaves from the plant Camellia sinensis are processed three different ways to produce the three major classes of tea, known as black (left), green (center), and oolong.
(K10694-1)
Tea is the most-consumed beverage worldwide next to water. For some 5,000 years, people have been getting a lift from brewing tea leaves. But it's only been in the last three decades that researchers have immersed themselves in the science behind tea's purported health benefits.

Several ARS scientists at various laboratories are studying the bioactivity of tea compounds. Some have studied the relationship between tea and metabolism, and some have looked at the effect of tea on blood glucose and cholesterol levels. Others are studying tea's impact on the ability of the body's cells to handle oxidative stress. And some are looking at the effect of green tea on slowing development of abnormal blood vessels in lab mice. In certain diseases, including cancer, angiogenesis—growth of new blood vessels—becomes excessive. These new vessels not only provide nourishment to tumors, but they also serve as portals through which tumor cells can escape into the body's circulatory system and spread to other organs. Compounds found to be anti-angiogenic may prove therapeutic by "starving" the tumors.

Differences in Tea Types
The age-old Camellia sinensis plant is the source of all nonherbal teas. Manufacturers process C. sinensis leaves three different ways to produce the three major classes of teas known as green, black, and oolong. Today, about 75 percent of the tea produced worldwide is black; about 23 percent is green; and about 2 percent is oolong.

Next to water, tea is the most consumed beverage worldwide. The source of all non herbal teas is Camellia sinensi. (K10695-2) Consider that coffee beans are green before roasting turns them brown and ready for market. Tea leaves are also green at harvest. To achieve a variety of taste profiles, manufacturers carefully control whether, and for how long, tea leaves are exposed to air, a process called fermentation. When fermentation is completely arrested, the tea stays "green" or yellowish brown. When fermentation time is long, the leaves darken and become "black" tea. Somewhere in between these two extremes, "oolong" tea is created.
Over the centuries, as C. sinensis plants grew in the sun, they protected themselves against photosynthetic stressors by forming chemicals known as polyphenols. This group of beneficial compounds includes flavonoids—the same class of compounds that give many fruits and vegetables their antioxidant boost. It is perhaps because of tea's high antioxidant activity that tea research is taking such a variety of turns.