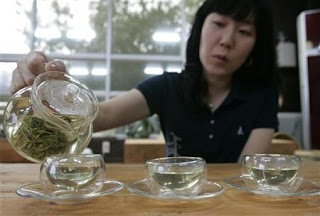 (Reuters) - Green tea, taken in a capsule or drunk in a cup, may shave a few points off "bad" cholesterol readings, according to a U.S. study involving more than a thousand people.

The findings, published in the Journal of the American Dietetic Association, showed that green tea trimmed 5 to 6 points more from people's total cholesterol and "bad" LDL cholesterol levels than dummy capsules or other treatments.

The trials tested either green tea itself or capsules containing green-tea compounds called catechins, which are thought to decrease cholesterol absorption in the gut.

Green tea in a cup was more consistently effective than capsules, though the benefits overall were fairly small, noted senior researcher Olivia Phung, an assistant professor of pharmacy at Western University of Health Sciences in Pomona, California.

"If someone is already taking medication for their cholesterol, they should stick with it and not try to trade it for green tea, either capsules or the beverage," she told Reuters Health in an email.

But adding green tea to your diet could be one way to further improve cholesterol numbers, she said.

The researchers, however, found no strong evidence that green tea boosted "good" HDL cholesterol, or cut triglycerides, another type of blood fat.

Phung's team pooled the results of 20 clinical trials that involved a total of 1,415 adults.

Participants were randomly assigned to either use green tea every day, as a beverage or capsule, or be part of "control" groups that took placebo capsules, drank a low-catechin tea or downed water.

The trials lasted anywhere from three weeks to six months and the benefits seemed to be limited to people who already had high cholesterol when they entered the study.

Overall, tea seemed more effective than capsules, though Phung said there isn't enough data to be sure that the beverage is better than the extract.

A number of clinical trials that examined whether green tea, or its extracts, can benefit people's cholesterol levels have reached mixed conclusions. Most of the trials have been small, making them less reliable.

There are other questions too, including what dose of green tea catechins is ideal.

In the trials Phung's team studied, the researchers were unable to test for a "dose-response" effect, which would have shown whether the cholesterol benefits increase as the catechin dose goes up.

"We would really need to have some head-to-head studies comparing the different forms of green tea in order to show which ones work more effectively," Phung said.

As for side effects, green tea is considered safe in moderate amounts, though the drink and the extracts contain caffeine, which some people may need to avoid.

There have also been a few dozen cases of liver damage reported among people using green tea extracts, but it's not certain that the supplements are to blame. SOURCE: bit.ly/rujlW7

(Reporting from New York by Amy Norton at Reuters Health; editing by Elaine Lies and Idayu Suparto)
at December 06, 2011