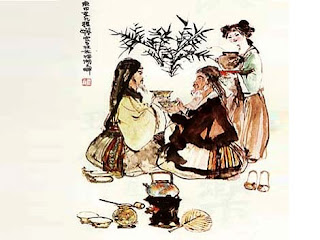 Serve tea: Serving tea to the guest is a traditional Chinese convention lasting for more than 1000 years. The host must serve the tea respectfully using both hands to hold the tea cup. Those who are dainty usually will put the cup onto a saucer or tea-tray, and, when offering the tea, they will use two hands to hold the saucer or tea-board before the chest while saying softly “Enjoy your tea”. The guest, at the same time, should slightly move his body forward and express gratitude.
Present tea: If the guest likes the tea he has drunk, the host will commonly present some tea to the guest to show his great hospitality.
Making salutation by knocking the desk: When the host serves tea or add water for his guests, some guests will knock the desk rhythmically using the bended middle finger and forefinger of their right hand to express their thankfulness.
Covering cup to thank the host: It is a convention for the host to serve tea and add water for the guest. If the guest has drunk his fill and wants to leave, he will usually flatly spread out his right hand with the centre of the palm downwards onto the tea cup, indicating, “Thank you. I don’t need more tea.
Free tea: Free tea, mostly offered by Non-government charity organizations, is popular in rural areas of Jiangnan (south of the lower reaches of the Yangtze River) of China. Generous people raise funds out of their own wills to set bowers and tea canopies, where they heat water, brew tea and offer to passengers free. In some areas, names of contributors will be carved on the stele. In old times, some nunneries also used to offer free tea for passengers, and these nunneries were called “Tea Nunnery”.
Substitute tea for wine: The tradition of substituting tea for wine has existed for more than 2000 years in China. In the Zhou Dynasty, a prohibition was decreed by Emperor Wuwang, who knew that the Shang Dynasty was just defeated due to alcoholic addiction and corruption. So people began to offer tea to the emperor, while the noble and common people substituted tea for wine too. The custom has come down until today.
Tea food: Tea is not only a kind of drink, but also can be added into food to become a mellow, appetizing tea food. Tea food can be used to relieve people's hunger without feeling too full. There are some relative tea foods, such as sesame sweet tea produced in Changsha of Hunan Province, smoked bean tea produced in Zhejiang Province, ghee tee produced by the Tibetan, and Babao oil tea produced by the Miao minority.
Tea after or before dinner: To clean the mouth and get up the appetite, people usually drink clear, sweet, mild green tea or scented tea before dinner. A short rest should be taken before drinking tea after dinner. Sweet, greasy-removed tea like oolong and Puer tea is preferred after dinner, for it has the functions of digestion promotion, anti-alcohol and anti- halitosis.
By Explore Cultural China
at November 17, 2012