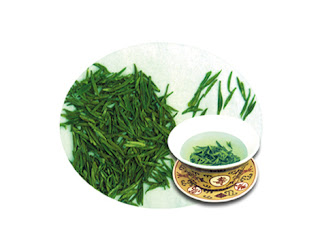 Huiming Tea, or "White Tea" in ancient China, is a traditional famous tea in Zhejiang Province, which is also called Jingning Huiming. It is produced in Huiming Village on Chimu Mountain, Hongken District, Jingning She Nationality Autonomous County. According to documents, tea plants were first planted in Jingning during 847 to 859 A.D. In 861, monk Huiming built a temple on Nanquan Mountain and planted tea plants surrounded it. Named after the monk, the tea produced there was superb in quality and has had a history of over 1100 years till now. Today, there still remains an ancient tea plant on the right side of the temple. The tea features yellowish ivory young leaves and assume white color after steeped, boasting fine color, aroma and taste. It's thus called White Tea, Superb Tea or Orchid Tea.
The Huiming tea is stout and tight in shape, verdant and smooth in color with visible white hairs on tea leaves. It tastes fresh, sweet and mellow tinted with the aroma of orchid and fruits. The liquid appears clearly green and limpid.
By Explore Cultural China
at November 21, 2012