The Classics of Tea 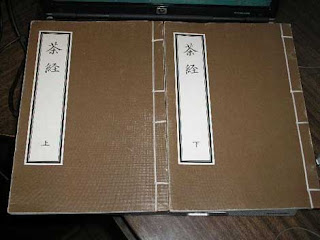 The Classic of Tea is the very first monograph on tea in the world, written by Chinese writer Lu Yu between 760 CE and 780 CE (age of Tang Dynasty). According to popular legend, Lu Yu was an orphan of Jinling county (now Tianmen county in Hubei province) who was adopted by a Buddhist monk of the Dragon Cloud Monastery. He refused to take up the monastic robes and was assigned menial jobs by his stepfather. Lu Yu ran away and joined the circus as a clown. At age 14, Lu Yu was discovered by the local governor Li Qiwu who offered Lu Yu the use of his library and the opportunity to study with a teacher. During the An Lushan and Shi Siming rebellion period, Lu Yu retired to Shaoqi (now Wuxing county, Zhejiang). During this period, Lu Yu made friends with many literati, including the calligrapher Yan Zhenqing and the poet Huang Pu Zheng and wrote his magnum opus: Cha jing.
For Lu Yu, tea symbolized the harmony and mysterious unity of the Universe. "He invested the Cha jing with the concept that dominated the religious thought of his age, whether Buddhist, Taoist, or Confucian: to see in the particular an expression of the universal".
By Explore Cultural China
at November 30, 2012