Assam tea is a black tea named after the region of its production, Assam, in India.
Assam tea is manufactured specifically from the plant Camellia sinensis var. assamica (Masters).

This tea, most of which is grown at or near sea level, is known for its body, briskness, malty flavor, and strong, bright color.
Assam teas, or blends containing Assam, are often sold as "breakfast" teas.
Irish breakfast tea, a maltier and stronger among the breakfast blends, for instance, is a blend of small-sized Assam tea leaves. 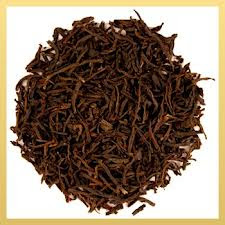 The state of Assam is the world's largest tea-growing region, lying on either side of the Brahmaputra River, and bordering Bangladesh and Burma (Myanmar).
This part of India experiences high precipitation; during the monsoon period, as much as 10 to 12 inches (250–300 mm) of rain per day.
The daytime temperature rises to about 103F (40 °C), creating greenhouse-like conditions of extreme humidity and heat.
This tropical climate contributes to Assam's unique malty taste, a feature
for which this tea is well known.
Historically, Assam has been the second commercial tea production region after southern China. Southern China and Assam are the only two regions in the world with native tea plants.

Assam black tea is known to help the immune system, decrease daily stress, reduce risk of stroke, increase oral health, and drop blood pressure.
Research has shown that theanine can help the body's immune system when it comes to responding to the invasion of infections.
This tea is connected to the increase in gamma delta T cells, that combat diseases.
Previous studies have indicated that tea drinkers who normally drink Assam tea showed signs of unusually large amounts of anti-bacterial proteins.
Drinking Assam tea helps to drop your daily stresses by lowering a hormone produced within the body named cortisol which is made post-stressful experience or traumatic situation situation.
Studies have indicated that sipping 3 or more cups of per has been linked to the serious deterrence of the possibility of a stroke.
This is common to both green as well as the black variety of tea.
It has been shown that Assam black tea benefits the body's creation of anti-bacterial proteins.
Also, the usual consumption of this special kind of tea can bring down the bacteria that are present inside the mouth, which can stop potential bad breath.
Assam black tea can also prospectively diminish the risk of cardiovascular troubles and reduce arterial stiffness and blood pressure as well.