Nilgiri tea represents a variety of black tea that is grown on the hills and mountains of the Nilgiris district in Southern India.
The distinctive characteristics include the intense aroma, fragrance and flavor. 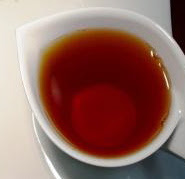 Nilgiri tea is generally described as being a dark, intensely aromatic, fragrant and flavoured tea.
It is grown in the southern portion of the Western Ghats mountains of Southern India.
It grows in the hills of the Nilgiris district of Tamil Nadu, though there are numerous other tea-growing districts in South India as well, including Munnar and Central Travancore, further south in Kerala state.

The flavor is caused by the high altitude at which this tea is grown.
The environment plays a very important role in the growth
of the tea plant and later in the aroma of the brew.
The same is the case with the Assam tea, which is grown at sea level.
Besides the fragrance, there are several other things that differentiate
the Nilgiri tea from Assam and Darjeeling.
For example, it is possible to harvest Nilgiri tea the entire year,
which is not the case for the other Indian teas.
Tea gardens and plantations represent one of the main attractions in the Nilgiris district.
In fact, there is also a Tea and Tourism Festival that takes place for 3 days each year in the area, in the months January and February.