It is a Chinese custom to treat guests with tea. However, people in east Guangdong and south Fujian have a special way of preparing tea, called gongfu tea. 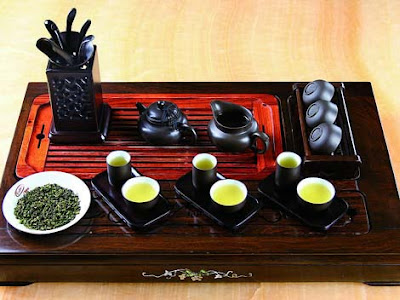 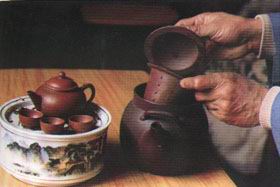 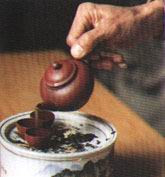 The tea sets for making gongfu tea are very small. The teapot is as big as a fist and the white and transparent teacups are as small as tiny liqueur glasses. In addition they use a small charcoal stove, a small water kettle and a porcelain base for holding the tea set.
Spring or well water is the best for making gongfu tea. Water is boiled with olive stones, which give out high flames and the delicate fragrance of olives. Before making tea, first the teapot is cleaned with boiled water to get rid of the remaining tea flavor in the pot and to warm the teapot. Then a big handful of tea leaves is put into the teapot.
After the water is boiled,  the kettle is lifted high to pour hot water into the teapot. The water is continually poured even when it overflows, so as to get rid of impure materials and foam, and to make mellow tea. After the lid is put on the teapot, boiling water is poured onto the teapot. This will cause the tea leaves to unfurl.
A few minutes later, the tea can be poured into the cups, which are arranged in a circle.  It is poured with a circular motion into each cup. In this way, the color and consistency of the tea in all the cups are the same. To avoid creating foam and scattering the fragrance of tea, the teapot should be held close to the teacups. When the tea is ready, the teacups are presented to guests and elders with both hands.
It is mentally refreshing to see the yellow and limpid tea and smell its delicate fragrance. The first sip seems slightly bitter, but a while later, the sweetness of the tea can be savored.
Wulong (black dragon) tea is the best variety for making gongfu tea. Half fermented, Wulong tea is as mellow as black tea and as refreshing and sweet as green tea, complete with lingering after taste. According to research, Wulong tea helps prevent and cure illnesses, prolong life and prevent arteriosclerosis and cancer. 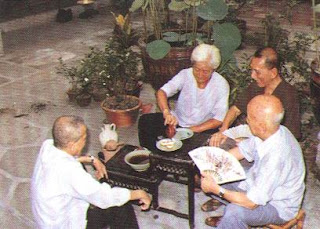 Guangdong's Wulong tea comes from Anxi in Fujian Province. Legend has it that the first cultivator of the tea was named Wu Liang.
One day, Wu Liang went home after he had picked several pounds of mountain tea and caught a river deer. In the evening, he was busy with killing the river deer, and didn't have enough time to dry the green tea. The next day, he found the tea in the basket had fermented on the way back and after having been stored in the basket the whole night. He fried the tea at once. To his surprise, he found that the tea tasted very mellow, with no bitter and astringent taste. Soon Wu Liang taught his fellow villagers how to make the tea. Almost everyone in his village liked the fermented tea and they named it Wu Liang tea. In the south Fujian dialect, liang and long are two homophonic words. As time went by the tea was called Wulong tea by later generations.