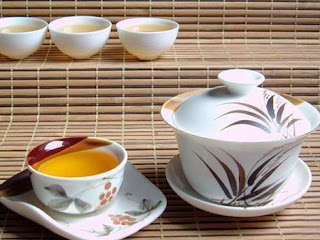 Wuyi Cassia Tea (Rougui or Yugui in Chinese) is so named because it is similar to cassia in both aroma and flavor. According to documents, the name appeared as early as in Qing Dynasty. It is a kind of oolong featuring fresh leaves from high quality tea plants, and a highly aromatic breed among Wuyi Rock-essence Tea that is processed in the same way as other breeds are produced.
The Cassia Tea is produced in the famous Wuyi Mountain Scenic Area in Wuyishan City, Fujian Province and is said to originate in the Mazhen Peak of the mountain. In early 1940s, the tea had already become one of the ten breeds planted in Wuyi Mountain tea garden, while it was gradually recognized by people because of its high quality ever since 1960s. With its planting area expanding year by year, today, it has become a major breed among varieties of Wuyi Rock-essence Tea. 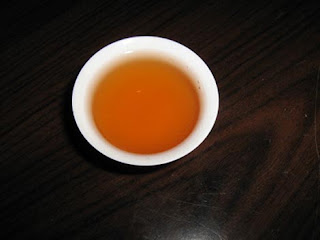 The Wuyi Cassia Tea is regularly curly in strips with glossy brownish green color. The dry tea smells sweet, which gives out a creamy, fruity and cassia-like aroma after steeped. It tastes mellow with sweet aftertaste. The liquid takes on a clear orange yellow color, with the leaves evenly spread with light green bottom and red edge. It can still retain the cassia aroma after added with water for six or seven times.
By Explore Cultural China
at July 19, 2012