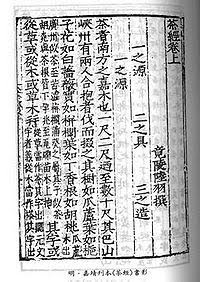 The Classics of Tea – Lu Yu’s Cha Ching (760 AD)
The word "Cha" is derived from the Chinese character for tea.

It is pronounced as either "t'e" or "ch'a."
Derivatives of one or both of these pronunciations
appear in almost every language for the beverage known as Tea.

In the ancient classic Shi Jing – The Book of Songs, tea was called ‘tu’ - 荼 and in the ancient classic Er Ya that was written and complied in the early Han dynasty tea was called ‘jia’ - 檟.
‘Jia’ means bitter and ‘tu’ means small plant. Guo Pu (276-324AD) also known as Jingchun (景纯), was a Jin dynasty scholar born in Yuncheng, Shanxi, was a noted natural historian and also a versatile and prolific writer, who annotated the word ‘tu’.

It was during the Han dynasty (206 BCE–220 CE) that the word ‘tu’ began to be pronounced ‘cha’.
In the Fujian dialect the word ‘te’ developed to ‘tu’ then later tea in English and later the word ‘jia’ became ‘cha’ and ‘chai’ in Russia and India.
The Classics of Tea – Lu Yu’s Cha Ching (760 AD) is where the first use of the word ‘cha’ is found.

T'ing - man standing at his place on earth Mu - tree