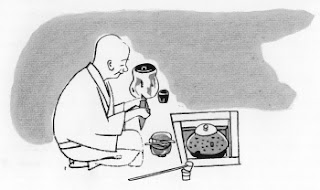 There was once a priest who was very fond of drinking tea. He always made the tea himself and was very fussy about the utensils he used. One day in an old secondhand shop he discovered a beautiful iron kettle used for boiling water for making tea. It was a very old and rusty kettle, but he could see its beauty beneath the rust. So he bought it and took it back to his temple. He polished the kettle until all the rust was gone, and then he called his three young pupils, who lived in the temple.

"Just look what a fine kettle I bought today," he said to them. "Now I'll boil some water in it and make us all some delicious tea."

So he put the kettle over a charcoal fire in a brazier, and they all sat around waiting for the water to boil. The kettle started getting hotter and hotter, and suddenly a very strange thing happened: the kettle grew the head of a badger, and a bushy badger tail, and four little badger feet. 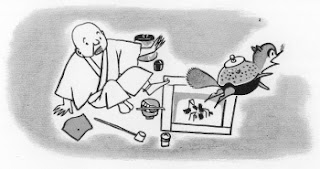 "Ouch! it's hot!" cried the kettle. "I'm burning, I'm burning!" And with those words the kettle jumped off the fire and began running around the room on its little badger feet.

The old priest was very surprised, but he didn't want to lose his kettle. "Quick! quick!" he said to his pupils, "don't let it get away. Catch it!"

One boy grabbed a broom; another, a pair of fire tongs; and the third, a dipper. And away the three of them went, chasing after the kettle. When they finally caught it, the badger's head and the bushy tail with the four little badger feet disappeared and it was just an ordinary kettle again.

"This is most strange," said the priest. "It must be a bewitched teakettle. Now, we don't want anything like that around the temple. We must get rid of it."

Just then a junkman came by the temple. So the priest took the kettle out to him and said: "Here's an old iron kettle I'll sell it to you for very cheap, Mr. Junkman. Just give me whatever you think it's worth."

The junkman weighed the kettle on his hand scales and then he bought it from the priest for a very small price. He went home whistling, pleased at having found such a bargain.

That night the junkman went to sleep and all the house was very quiet. Suddenly a voice called: "Mr. Junkman. Oh, Mr. Junkman!"

The junkman opened his eyes. "Who's that calling me?" he said, lighting a candle.

And there he saw the kettle, standing by his pillow, with the badger head, and the bushy badger tail, and the four little badger feet. The junkman was very surprised and said, "Aren't you the kettle I bought from the priest today?"

"Yes, that's me," said the kettle. "But I'm not an ordinary kettle. I'm really a badger in disguise and my name is Bumbuku, which means Good Luck. That mean old priest put me over a fire and burned me, so I ran away from him. But if you'll treat me kindly and feed me well and never put me over a fire, I'll stay with you and help you make your fortune."

"Why, this is very strange," said the junkman. "How can you help me make my fortune?"

"I can do all sorts of wonderful tricks," said the kettle, waving his bushy badger tail. "So all you have to do is put me in a show and sell tickets to the people who want to see me do my tricks."

The junkman thought this was a splendid idea. The very next day he built a little theater out in his yard, and put up a big sign which said: "Bumbuku, The Magic Teakettle of Good Luck, and His Extraordinary Tricks." 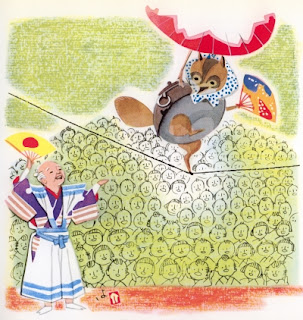 Every day more and more people came to see Bumbuku. The junkman would sell tickets out front and then when the theater was full he'd go inside and start beating a drum. Bumbuku would come out and dance and do all sorts of acrobatics. But the trick that pleased people most of all was when Bumbuku would walk across a tight rope, carrying a paper parasol in one hand and a fan in the other. The people thought this most wonderful. They would cheer and cheer for Bumbuku. And after every show the junkman would give Bumbuku some delicious rice-cakes to eat.

The junkman sold so many tickets that he finally became extremely rich. One day he said to Bumbuku: "You must get very tired doing these tricks every day. I now have all the money I need. So why don't I take you back to the temple, where you can live very quietly?

"Well," said Bumbuku, "I am getting a little tired and I would like to live quietly in a temple. But that old priest might put me on the fire again, and he might never give me delicious rice-cakes."

"Just leave everything to me," the junkman said.

So the next morning the junkman took Bumbuku and a large amount of money and some of Bumbuku's favorite rice-cakes to the temple.

When they got to the temple the junkman explained to the priest everything that had happened, and he gave all the money to the priest for the temple. Then he said: "So will you please let Bumbuku live here quietly forever, always feeding him rice-cakes like these I've brought and never putting him over the fire?"

"Indeed I will," said the priest. "He shall have the honored place in the temple's treasure house. It's really a magic kettle of good luck, and I would never have put it over the fire if only I'd known."

It is said that Bumbuku is still there in the treasure house of the temple today, where he is very happy. They still give him delicious rice-cakes to eat every day and never, never put him over a fire. He is peaceful. He is happy. 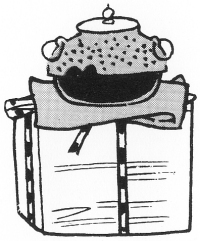 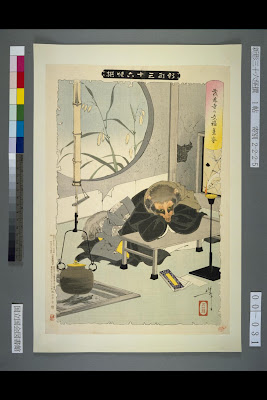