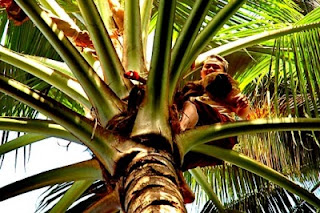 Harvesting: Ovan Diputra, Luh and Nyoman’s son, is both a university student and a palm sugar farmer.
For centuries past, the people of Kawan Besan in Klungkung have been cooking up the palm sugar or gula merah that is the lifeblood of their town.
Made from the sap of coconut palms, gula merah producer, Luhwirasamini, says its origins are lost in the minds of her ancestors.

“I learned to make gula merah from my mother and her mother before her — it comes from the knowledge of our nenek moyang [ancestral grandmothers],” says Luh as she is known locally.
Palm sugar is known throughout Java where it is produced in staggering amounts, however the gula merah of Bali is in a different league, according to Luh who says Bali’s variety is still pure and made without preservatives or additives. This means the sugar has a limited shelf life and as yet, cannot be exported.
Produced in smoky family kitchens over a wood fire, Bali’s gula merah is an integral food during holy days when its price almost doubles from Rp 12,000 (US$1.39) to Rp 20,000 a kilogram. The sugar’s price reflects the supply and demand and also the labor involved in collecting palm sap and its preparation from sap to sugar. 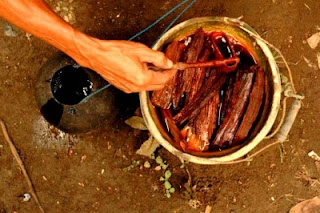 Luh’s husband is an athlete that could take down Olympians. Now 53 years old, he has been harvesting the sap since he was just 15. His work is arduous and extremely dangerous.
“We have 16 producing coconut palms. Every morning and evening I climb the trees and collect the sap and replace the beruk [containers made from coconut shells]. That’s about 40 kilos of sap each day,” says Nyoman Sartr of the 32 coconut-palm climbs he makes daily. 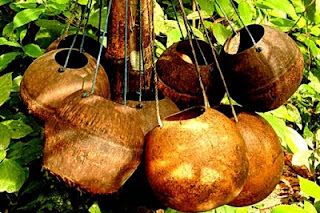 All natural: Like the sugar, tools of the red sugar farmer’s are formed in the forests.
The trees stand taller than three story buildings and the wiry, tough Nyoman springs from foothold to foothold as he scales their heights, approaching the most dangerous section of the climb as he reaches the palm fronds and swings his weight into palm’s crown. He uses no ropes, no harness, depending on his lifetime learning the ways of the coconut palm.
“No I have never fallen, but it is very tiring work,” says Nyoman on the verandah of their modest home in Besan.

In much of Indonesia as in the rest of world, young people are moving away from the farm, seeking better paying jobs in factories or offices, hoping for better education choices for their children, better qualities of life amid the trappings of progress, but for Luh and Nyoman and the people of their village, the sugar offers the sweetest
of lifestyles.
“Most of the young people here are continuing the gula merah tradition. Our son is doing his university thesis on Bali’s gula merah — it is the result of the sugar that we can send him to university,” says Luh who can produce 35 kilograms of palm sugar weekly from the family’s coconut palms.
Luh’s son, 22-year-old Ovan Diputra, plans to continue in his father’s coconut palm footsteps after he completes his degree. He admits, however, to still being deeply afraid of climbing his father’s tallest palms. 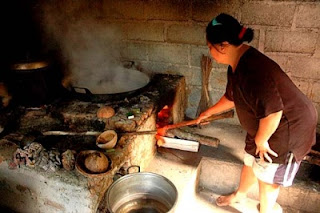 Subtle taste: The palm sap is soaked in jackfruit wood to enhance the flavors ahead of cooking.
“I am still learning to climb. I am happy climbing the lower trees, but I am still really scared of the tall palms. It is very dangerous, particularly after the rains when the palms’ fronds are slippery,” says Ovan who honors his parents in his thesis.

“I am doing my thesis on gula merah, because Mom and Dad make this traditional food and I am looking at the distribution of gula merah production in Bali. The tradition is continuing here in Bali, but it is difficult to compete with palm sugar from Java. For me it’s very important to keep alive our industry, because towns like ours depend on the red sugar to survive.

“Javanese palm sugar has preservatives, so it can travel. Our Bali sugar is natural, organic, so it melts quickly. Research is being done on how to preserve the sugar without using chemicals, so it will be still be pure Balinese gula merah with a longer shelf life that could allow for export, but to date natural preservatives have not been successful,” says Ovan.
He adds there are 72 men in his village who, like his father, harvest palm sap daily which the women cook up to make the coconut-shell-sized blocks to be sold in traditional markets.
Lengthy process: Luhwirasamini boils the sap over a wood hearth for more than four hours a day to reduce the sap to sugar.
“The economic value of gula merah to our village is very important. In Bali we still have religious ceremonies where the gula merah is used in many of the Balinese snacks eaten on holy days. Also most of the farmers here have not gone beyond elementary school, so if they were to look for other jobs, it would be impossible for them.

Here they have a home industry that offers a good business, and we see the young people, like myself want to continue this and expand,” says Ovan.
Concerns that the commercial development of Bali could entice the red sugar farmers to sell their lands is an issue the villagers of Kawan Besan are already familiar with. However, they say their cultural and religious laws are still strong enough to face down the promise of big dollars.
“The head of the village farms gula merah. We continue this for our ancestors and our families. We have adat [cultural and religious laws] to protect our area. There was once a developer who wanted to set up a zoo here, but the project was banned. We work together to protect our environment and our families so we can keep growing our gula merah into the future,” says Ovan.
at January 21, 2012