Tea - tracing its flavorful journey - Part One of seven 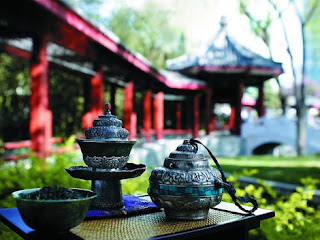 The most famous American tea party was in Boston Massachusetts, the year, 1773 CE, when about fifteen thousand pounds were dumped into the harbor.
Nowadays, smaller tea parties are popular and they don't waste good tea.
They drink and enjoy tea and consider it a healthy potable.
This is not new to the Chinese.
Lin Yutang wrote that Chinese are happy as long as they have a teapot.
He knew that tea is one of the Chinese seven basic daily necessities.
The others are fuel, rice, oil, salt, soy sauce, and vinegar.


Many people are learning that tea, the most popular beverage in the world, is an excellent one with many positive health claims made for it.
One of these is that tea, especially green tea, may prevent some types of cancer.
In spite of this popularity and the health aspects of tea, little is known about it.
People don't know where tea comes from, how to consume it, and most importantly how to brew the thousands of varieties and brands available.
They may know that tons were dumped in Boston, but not that the provinces of Yunnan and Sichuan are original sites of tea culture.

For thousands of years, traders transported tea by caravan.
They took tea on horseback, the backs of other animals, and by rudimentary vehicles to border towns and to places beyond China's borders.
In the reign of Emperor Qianlong (1736 - 1795 CE), hundreds of caravans needed thousands of horses.
A caravan could have several hundred horses but several caravans were known to regularly travel together carrying tea leaves to Tibet and beyond Tibet every year.
These caravans scaled mountains, crossed rivers, trekked through rain forests, traversed fog-filled valleys travelling with heavy loads of leaves to bring them westward.

Along the way, the caravan traders may have eaten nang, a staple food in Xinjiang and other areas of their route.
Maybe they had lamb kebabs, a shredded carrot and lamb dish that they ate with their fingers, and some pears, apricots, or Hami melons.
In many locations along this Silk Road, the nang, sort of bagel shaped, but only baked, not boiled, was eaten when drinking tea.

The ancient State of Shu had tea growing in plantations on Mount Mendong sending it to market in nearby Pengshan County.
The Sung Dynasty (960 - 1279 CE) and the Imperial Court had tea caravan offices in Xishuangbanna in Yunnan and elsewhere.
Some sites and artifacts have been found; but most remain undiscovered.
At least one tea tree, planted eight hundred years ago, still provides fine tea leaves. Another ancient one, a seventeen hundred year-old wild primitive tea tree, does as well. Both are producing leaves that are gathered and sold in the marketplace.
There are other oldies approaching the age of the younger tree, however, they are not considered noteworthy.