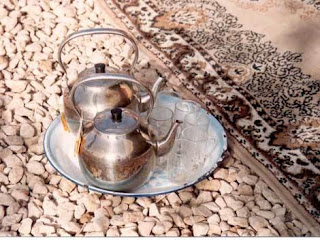 In Dali, 'three-course-tea' is still enjoyed.
It became popular at court during the Nanzhao Kingdom.
That tea is made with the best well water and served with walnuts, honey, and ginger. That is one of the sweet sides of tea.
Another side is the anger expressed over tea taxes.
These were collected during years of the Qing Dynasty when, annually and as tribute, more that thirty thousand kilograms of Pu-er tea was delivered to the Imperial Court.
An article about some tea history and inroads in Europe and England, appeared in Flavor and Fortune's Volume 2(4) on pages 9, 22, and 23.
That article included a recipe for Tibetan Tea called Boeja.
It discussed processing of the leaves and how the Dong, Miao, Tibetans, and Uygur minority populations in China use tea.
It also suggested books to learn about this beloved beverage including Imperial Master Lu Yu's first extensive treatise on tea.
It did not mention that the Sichuan-Tibet and Qinghai-Tibet highways, ships and the airways were thoroughfares replacing the ancient tea caravan routes, and that the Karakoram highway is but a dozen years old.
It did not say that in 641 CE, Princess Wen Cheng married a Tibetan king and brought tea and tree seeds to Tibet.
That small gesture reduced the arduous half-year journey from China's Eastern tea gardens spreading plantings of tea more widely.

In 1951, other tea seeds and tiny tea tree saplings were shipped to many other new mountainous locations in China.
With easier access, anyone can travel this route that endied in Xian and was used for more than a thousand years.
It did not say that anyone can now bring things in and spread new ideas and new things.

Since circa 2737 BCE, when Emperor Shen Nung drank hot water with leaves from an evergreen that fell into it, tea now known as Camellia sinensis, has been consumed in China.
It has been about five thousand years since the Emperor found this hot water to be sweet, bitter, fragrant, stimulating, and very tasty.

Called ming in ancient times, the leaves of the tea plant have been prescribed for preventing and curing many an illness.
The Emperor knew tea as a stimulant and we know that the caffeine and theobromine in it increases the activity of digestive juices.
We also know that tea's tannins strengthen capillaries and stimulate the adrenal gland; and we know that the esters in it are touted, in China, to prevent radioactive injuries. There is a small but valuable amount of manganese, selenium, and fluorine in tea along with many polyphenols.