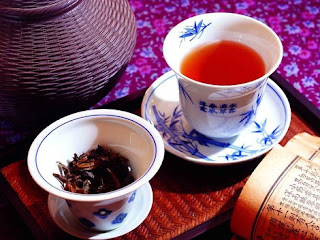 People throughout China drink tea daily. Tea is to the Chinese as wine is to the French, as beer is to the Germans, as cigars are to the Cubans.
History
It is true that the word for tea, cha, never appeared in ancient Chinese texts; the character cha was created by Lu Yu in the 8th century during the Tang dynasty (618-907 A.D.). Based on written records and more recently excavated archaeological evidence, we know that tea as a beverage had become rather popular in Central China along the Yangzi River and its tributaries during the Western Han period (206 B.C.-24 A.D.) at the latest.
Chinese drink tea at meals and serve it to friends when they come for a visit. "On such occasions, it is served continually as long as they remain together engaged in conversation," wrote Matteo Ricci (1552-1610), an Italian Christian missionary who stayed in China for 28 years, in "China in the Sixteen Century: The Journals of Matthew Ricci: 1583－1610." "This beverage is sipped rather than drunk and it is always taken hot," Ricci wrote. He also remarked that the bitter taste of tea was not unpleasant and was good for one's health. 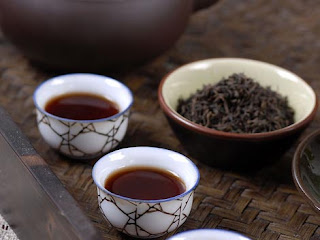 Category
Because of the geographic location and climate, different places grow various kinds of tea. In general, there are five kinds of tea classified according to different techniques involved in the brewing process.Green teaGreen tea keeps the original color of the tealeaves without fermentation during processing. Top brands include Longjing in Zhejiang Province, Maofeng of Huangshan Mountain in Anhui Province, and Biluochun in Jiangsu Province.Black teaBlack tea, known as "Red Tea" (hong cha) in China, is fermented before baking. The best brands are Qihong in Anhui, Dianhong in Yunnan, Suhong in Jiangsu, Chuanhong in Sichuan and Huhong in Hunan.Wulong teaThis represents a variety half way between the green and the black teas, and it is made after partial fermentation. Wulong tea abounds in Fujian, Guangdong, and Taiwan along China's southeast coast.Compressed teaIt is compressed and hardened into a certain shape. It is easy to transport and store and is mainly supplied to the ethnic minorities living in the border areas of the country. Most of the compressed tea is in the form of bricks, thus the name "brick tea." Sometimes it is cake or bowl-shaped. It is mainly produced in Hubei, Hunan, Sichuan and Yunnan provinces.Scented teaIt is made by mixing fragrant flowers in the tealeaves in the course of processing. The flowers commonly used for this purpose are jasmine and magnolia among others. Jasmine tea is a well-known favorite among the northerners in China.