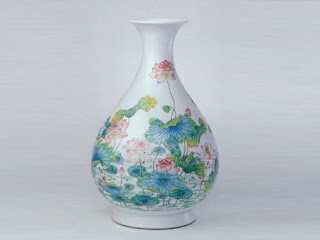 Famille-rose porcelain 粉彩瓷 , so called its pink enamel, first came into being during the Yongzheng reign (1723-1735) in the Qing Dynasty (1644-1911) and continued to be made throughout the Qianlong reign (1736-1795) and beyond. Main materials and techniques used to make the porcelain were all introduced from abroad in the beginning.
When making famille -rose porcelain, craftsmen fired glass whiteness onto plain porcelain, creating patterns with Chinese painting techniques and then baking it in a kiln. 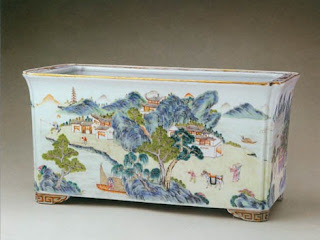 During the Kangxi reign, there were only a few works of famille -rose porcelain, whose color paintings were also very simple -- mainly patterns of flowers, clouds and dragons . During the Yongzheng reign, the porcelain enjoyed great improvements. Both the porcelain and decorations produced in this period featured a most delicate quality and brilliant color; these pieces are among the most highly prized works of this type of porcelain.
The famille-rose porcelain produced in the Qianlong reign saw an obvious change -- other colors such as green, yellow, blue, carmine or purple, were added to the white porcelain. At that time, the porcelain was no longer as delicate, crystal-like and colorful as that produced in the Yongzheng reign. When it came to the Jiaqing and Daoguang reigns, famille - rose porcelain mainly inherited a form of traditional development and did not witness much improvement. The ceramic glaze used was not very refined and featured strong hues. 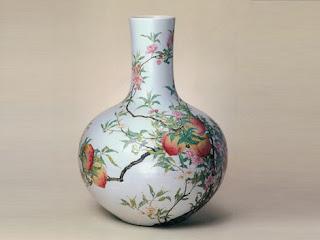 During the Xianfeng and Tongzhi reigns, the composition of famille-rose pictures became quite complicated, although the painting skills were simple and the materials used were rough. The famille-rose porcelain produced during these periods featured comparatively faint hues, and, in order to make the colors more brilliant, gold was applied to the famille -rose base.
The characteristics listed above are the major criteria used to distinguish famille -rose porcelain produced in different periods during the Qing Dynasty.
Famille-rose porcelain wares in the Qing Dynasty mainly included pots, bottles, wine vessels, jars, basins, plates, urns, boxes, and so on. The patterns mostly included dragons and phoenixes, flowers, landscapes, human figures and themes from legends. Subjects on the porcelains often came from paintings of famous painters at that time. 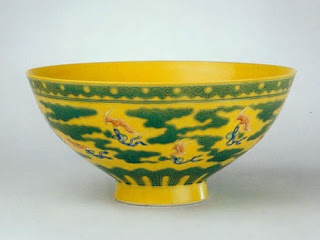 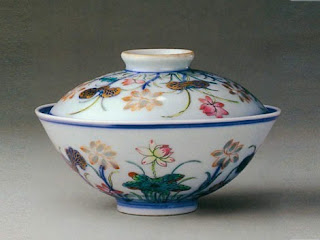