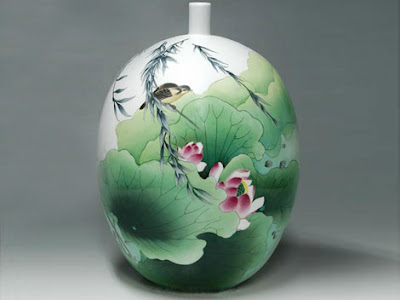 The wucai porcelain is a kind of overglaze decoration porcelain which is made by firing the already-fired plain base painted with some colorful patterns in the colourful kiln with 770 – 800 degrees Celsius. It features rich colors, with red, yellow, green, blue, purple etc as the basic hue. Because it has clear lines and the firing temperature is slightly higher than that of famille rose, and the colour not so soft, it is also called “yingcai” (literally, hard color).
Wucai is a new variety of the Jingdezhen Kiln during the Ming and Qing Dynasties. As blue paint did not exist in the Ming Dynasty, blue-and-white took the place where blue color should be presented, hence the name “blue-and-white wucai”. It then became a feature peculiar to the age, with wucai in the Jiajing and Wanli Periods as the representatives.
The Wucai fired in Kangxi’s reign is the most well-known among all those in the Qing Dynasty. Other than red, green, yellow, brown and purple paints, overglaze blue was newly made to replace underglaze blue-and-white, and golden and black paints were also extensively applied, which added resplendence and flamboyance to its color.