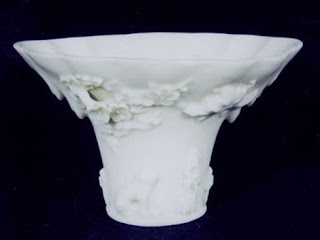 The first Dehua Kiln, whose white porcelain became a representative genre of the Chinese porcelain industry, was a famous kiln that specialized in white porcelain making. Its sites spread about within the scope of today's Dehua County, in East China's Fujian Province.
Dehua County in central Fujian Province is known as one of the Three Porcelain Capitals in China, together with Jingdezhen in East China's Jiangxi Province and Liling in Central China's Hunan Province.
Dehua porcelain dates back to the Song Dynasty (960-1279). Solid and smooth, Dehua porcelain is resistant to both heat and cold. One type of "Jianbai" porcelain in particular has a sparkle and luster even more stunning than white jade, and its ivory-white color and superb workmanship make it a favorite of art lovers. 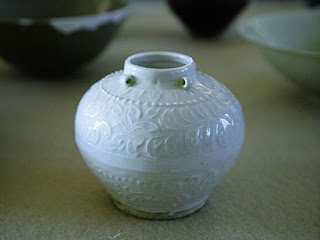 The body of its white porcelain was low in iron but high in potassium, while the color of the glazed surface was of a bright, smooth luster, as milky as frozen fat. It was thus often called "lard white" or "ivory white." Dehua white porcelain used to be one of the major export varieties in various dynasties. In the West it was called the "Chinese white porcelain" or "Marco Polo porcelain."
The most common objects of Dehua porcelain were a burner, cup, bottle, plate, tin, Zun (a kind of wine vessel), and Ding (an ancient cooking vessel), which were often decorated with appliqués (kinds of ornament) and stamps; the porcelain figurine was also remarkably exquisite. In fact, the masterpiece of Dehua porcelain was the white porcelain figure of Buddha.
Among Dehua porcelains, white Buddha figures, the most famous, represented the highest firing technique of Dehua kilns at that time. With a refined design and an elegant touch, the white porcelain of Dehua kilns became a representative genre of Chinese porcelain industry in that period and was reputed as the Bright Pearl of Porcelain in the World. 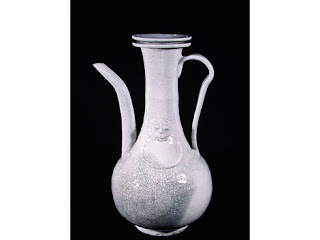 Although by the Song and Yuan dynasties (960-1368), Dehua porcelains were already being exported to other countries and regions, it was during the Ming Dynasty (1368-1644) that Dehua porcelain gradually developed its own techniques and styles and enjoyed great development.
In modern times, quite a few Dehua porcelains of the Qing Dynasty (1644-1911) have won gold prizes in expositions held both at home and abroad, such as Shanghai (East China), Taiwan Province, Japan, and Britain; in addition, Dehua porcelain is one of the main products of the national porcelain export, being exported to more than 80 countries and regions.
By Explore Cultural China
at August 23, 2012