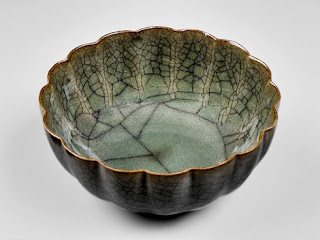 The Ge kilns had always been a mystery in the history of ceramics. Although authentic Ge porcelain wares are on display in the Beijing Palace Museum, Shanghai Museum and the Palace Museum of Taipei and so on, there is no surviving documentation from the Song dynasty, nor had any kiln sites ever been identified. 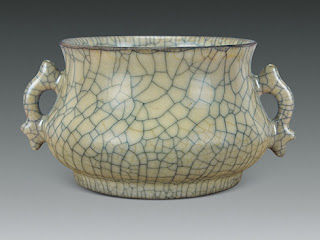 From existing Ge ware, we see all kinds of stoves, vases and dishes, including tripod cauldrons, cauldrons with fish-shaped handles, cauldron with glazed feet and double handles, cylindrical vases, thin-necked urns, bet bodied plates and so on, mostly imitating the design of ritualistic bronze ware and were intended from court use. Thus it had common elements with Ru and Imperial kilns but was very different from porcelain for the common people. 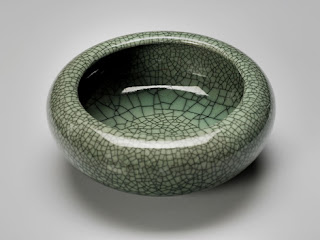 The most distinguished feature of Ge porcelain ware would be its crackling patterns. The surface of the glaze displays natural patterns such as ice-crackles, fine crackles, or fish egg crackles and so forth. The areas enclosed within the cracks can vary from the size of large chunks of ice to speckles as small as fish eggs. The actual crackle lines also vary in width and can be filled in with different colors such as black, gold or red. This effect is sometimes referred to as “gold and iron threads”. The crackling in the glaze is caused by differences in the degree of expansion of various parts of the glaze. This was originally an imperfection in technology, but was taken advantage of by porcelain artisans and made into added aesthetic element. 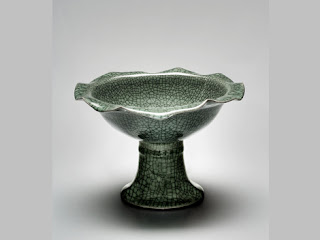