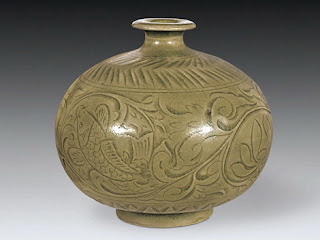 The original Yaozhou Kiln 耀州窑 is located in Yaozhou, which is present-day Huangbaozhen in Tongchuan of Northwest China's Shaanxi Province. Yaozhou ware was another major school of porcelain in northern China during the Song Dynasty (960-1279).
Exhaustive studies show that Huangbaozhen was an important porcelain-making site established in the Tang Dynasty (618-907). Its development continued till the reign of Jingkang (1126-1127) in the Northern Song Dynasty (960-1127), before gradually declining afterwards. However, the Yuan Dynasty (1271-1368) still saw the manufacture of Yaozhou ware. 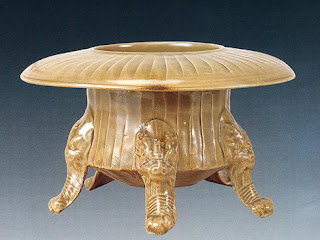 The porcelain school of Yaozhou ware spread over a wide area, extending east beyond Shaanxi Province to influence the Ruzhou celadon school in Central China's Henan Province; while in the west it spread to Xunyi on the border between Shaanxi and Gansu (Northwest China) provinces. The Xunyi kiln, discovered in May 1977, produced celadon ware of the Yaozhou School.
The celebrated Song poet Lu You said in the second volume of his Notes in an Old Scholar's Studio that Yaozhou celadon was similar to "Mi Se" ("secret color") porcelain of the Yuezhou kiln in East China's Zhejiang Province. It was durable and widely used by the populace. 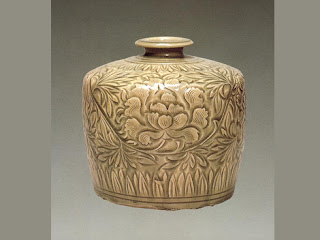 Qing Yi Lu , a work dealing with miscellaneous subjects, admires the concise and simple shape of a shallow bowl with a flat bottom devised by Yaozhou potters. The bowl was called "little seagull," illustrating the popularity of porcelain vessels manufactured in Yaozhou kilns.
In its early stage, Yaozhou ware of the Northern Song Dynasty had a rather coarse body and glaze and the vessels were mainly trumpet-shaped bowls. Teapots with a handle and short spout were externally decorated with some roughly incised lotus petals and peonies. Few had impressed (imprinted) designs.
In the middle period most porcelain vessels had thin bodies and were evenly glazed. Fired at high temperatures, they were durable. There was greater variety in shapes-bowls, plates, dishes, jars, saucers, boxes, censers, wine cups and lamps. One type of decoration consisted of bold, attractive motifs of flowers, human figures, and animals engraved in incisive strokes. 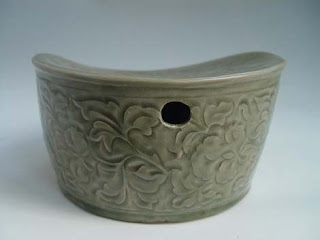 Impressed designs were also very popular during the middle period, and those covering the entire vessel inside and out were exquisite. Designs included flowers and grasses, fish, ducks, dragons, phoenixes, ocean waves, and floating clouds. The patterns of interlocking blossoms and plucked sprays of flowers were widely used, the best being peonies, chrysanthemums, and lotus flowers.
The vessels with still thinner bodies of the later period were prettier than those of the middle period. The designs were impressed, mostly at the bottom inside the bowls and plates; the finer ones depicted a phoenix gently touching peonies or a flock of cranes and children at play. The decorative art of Yaozhou ware was very influential in the development of Song arts and crafts.
Yaozhou kilns produced on a large scale. The kiln site of Huangbaozhen alone extended for five kilometers. According to archaeologists' measurements the kiln furnaces were generally 3.36 to 4 meters high and 2.16 meters long by 3.36 meters wide.
Unearthed from a Yaozhou kiln site were porcelain vessels decorated with dragon and phoenix motifs, showing mixed production of the simple, coarse vessels used by ordinary people, and a number of exquisite porcelain objects for the royal family.
By Explore Cultural China
at August 01, 2012