Production sites of Ding kilns were found in present day Quyang County, Hebei Province. Quyang County back in the Song Dynasty was within the Dingzhou region, hence the name Ding kilns. The history of the Ding kilns can be traced back based on unearthed specimens. There were white porcelains being made here as early as the Tang Dynasty; by the Five Dynasties Period, the porcelain business here was already booming. After the Northern Song Dynasty, Ding kilns were famous for its off-white glazes and other areas all strove to imitate Ding porcelain, which became the standard of white porcelain in China. 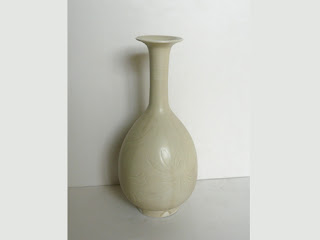 Aside from white porcelain, the Ding kilns also produced black, crimson, and green glazed porcelain. Its technology and varieties in glaze colors were astonishing.
Early Ding porcelain was single colored with little or no decoration; by late-northern Song Dynasty however, there would be exquisite patterns on porcelain ware, which were engraved, etched or imprinted. The patterns were precisely laid out, with a clear sense of sections and layers; lines were clear and organized into loose and dense areas. Popular motifs included water waves, swimming fish, land animals, birds, flowers, and playful children. Peonies, lotuses, and pomegranates and so on were the most common floral motifs. Engraved floral décor was the principal way of ornamentation in early Song porcelain. Once the technique caught on, it was combined with comb-etched images as another form of ornamentation. 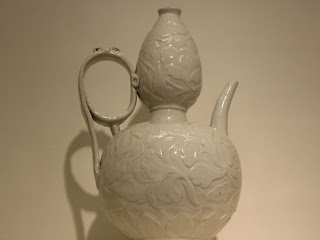 For example, at the center part of a flare-lip dish, the image of a flower was first carved, then with a fine-toothed comb, the area within the outlines of the leaves were comb-etched, leaving parallel lines that represent veins of the leaves. The most popular motifs done in this technique were the lotus, peony and so on. Engravings usually relied on bamboo chips and knives, while comb-etchings relied on a tool similar in shape to a comb to leave orderly patterns on the body. The combined result was commonly referred to as bamboo outlines with brushed patters, with lines that were tidy and natural. Imprinted patterns on Ding porcelain first appeared in mid-northern Song Dynasty, and matured late in the dynasty. the patterned décor was often place on the insides of plates and bowls.
To make imprinted patterns, it would require a mold with engraved patterns, which is pressed onto the not yet dried surface of the clay body. Most often, the imprinted image would be a positive image and would have added thickness and can create a very special effect of depth when light strikes the object. The motifs and designs were normally borrowed from silk tapestry or gold and silverware produced in the Dingzhou area. Therefore, imprinted motifs on Ding porcelain have appeared to be mature in style right from the start, with very high artistic merits. It had quite an effect on imprinted designs of latter generations.
The Song Dynasty Ding kilns produced vessels such as bowls, dishes, jars, cups, cases, vases, and pots, all for daily use. Vessels such as bowls with their large mouths and thinly cast bodies, needed to be overturned when fired in order to avoid deformation. Therefore at the mouth, there was the absence of glaze which felt quite astringent. High class items often have copper, gold or silver rims at the mouths.
Rare items were the round-bottomed jars and baby-shaped pillows with forms that were realistic and cuddly. From today’s surviving examples of Ding kilns’ quality works, people have found especially valuable pieces which contained inscriptions, imprinted writing or handwritings.
Among the five great kilns of the Song Dynasty, only the Ding kilns produced white porcelain, and it was quite famous during its time. It was for a time offered as tribute to the imperial families but was then discontinued for an unclear cause. 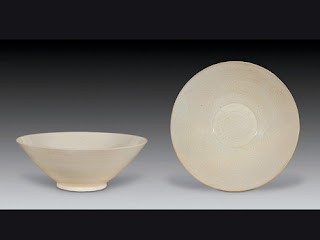 The official given reason was that Ding porcelain had unglazed parts. This was because Ding porcelain was produced through upside-down firing, and had no glaze at its mouth. However, Ding porcelain often had extensive gold, silver and copper edged around the unglazed rim. Therefore, some people believe that the real reason for discontinuing imperial use of Ding porcelain was not because of the unglazed areas.
Instead, it was attributed to the aesthetic preferences of its times. The white of the Ding porcelain was turbid, opaque and bland. In order to counter such a drawback, most Ding wares were decorated with imprinted or engraved patterns. When compared to porcelain of the Ge, Imperial, Fu and Jun kilns, Ding porcelain contained more synthetic feature, which fell short of achieving the ideals of natural and subtle beauty in the Song Dynasty. for this reason, Ding porcelain did not quite capture the interest of the literati class, and may have been considered objects of somewhat vulgar taste and style.
By Explore Cultural China
at August 29, 2012