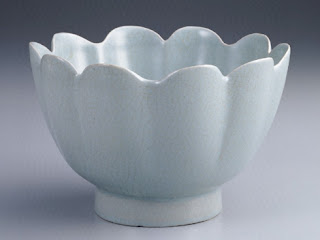 The Ru kilns have been oft mentioned by the writings of the literati. However, it was not until 1987 that a kiln site was actually discovered in a monastery that fired porcelain for the imperial government. The Ru kilns produced porcelain for the court for only a short twenty some years; the rest of the time was devoted to porcelain ware for average citizen use. Therefore, porcelains made by the Ru kilns for the imperial court known today are few and rare piece of treasure (less than 100 specimens in existence today). Due to its rarity, imperial Ru wares were sometimes hailed during the Ming and Qing Dynasties as the best of the Song kilns. 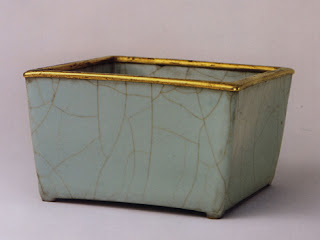 According to the book About Ceramics from the Qing Dynasty, “Ru kilns were originally producers of celadon”. Archeological digs further proved that sky-blue celadon, black porcelain, celadon, and Song tri-colored ware existed during the same time. The Ru celadon wares in the permanent collections of the Beijing Palace Museum, Shanghai Museum and Tianjin Museum all had glazes of a light sky blue color. Some were relatively darker and some were a bit subtler; all were smooth with restrained luster. There were fine and dense crackles that resembled crackling of ice. The Chinese slang for this effect was “crab claw veins” (蟹爪纹). 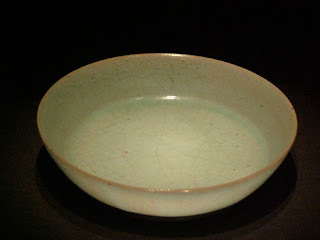 When the Ru kilns fired celadon, the ware was first fired in oxidation flame, then in reduction flame. The temperature was kept at relatively low levels (1125 to 1225 degrees Celsius), followed by a period of natural cool down so as to cause crystallization in the glaze. The rich amounts of crystals covered more than half of the glazed area. Sparse air bubbles also formed. Since Ru celadon experienced good crystallization during the firing process, its glazed surfaces not only showed a sky-blue color, a jade-like turbidity was also present. 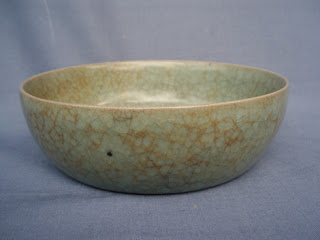 The sizes of most Ru porcelain vessels were usually rather small, none exceeded 30 cm in height; most were around 20 cm or so. The sizes of dishes, writing-brush basin, plates and other round wares were from 10 16 cm in diameter at the mouths. Those over 20 cm were very rare. The bodies of Ru porcelain were all quite thin and grayish in color. Round vessels such as plates and bowls were glazed in entirety, not exposing any areas of the body. Since these porcelains were fired while on extremely thin supporting stands, the back sides of most Ru wares had three to five very small burn marks. The ancients described these marks as “sesame-sized”.
source: Chinese Ceramics, pulished by China International Press
By Explore Cultural China
at August 17, 2012