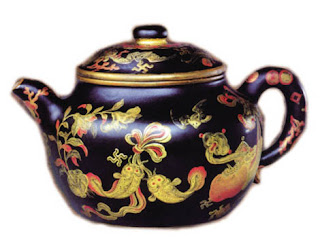 The Yixing Kiln in Tixing of East China's Jiangsu Province has undergone great changed throughout its history. Celadon (glazed pottery) began to be fired at the kiln early in the Han Dynasty (206BC-220AD). During the Tang Dynasty (618-907), porcelain was made. The kiln's most famous product, Zisha, or purple clay wares, began to be made in the Song Dynasty (960-1279), while the Zisha wares, especially the teapot, became famous across the country in the Ming Dynasty (1368-1644), and reached its peak in the Qing Dynasty (1644-1911). 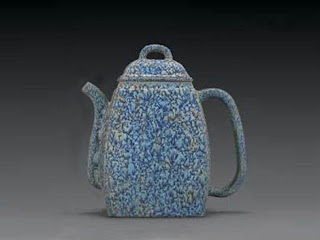 Zisha ware is made from the Yixing region's unique clay, which is fine and contains much iron content. Porcelain made of this kind of clay is mostly red brown, light yellow, and blackish purple. Zisha porcelain was popularized in the period from the Song Dynasty to the mid Ming Dynasty, due to the change of the ways of brewing tea.
People at that time brewed tea instead of boiling it, thus raising the need for teapots. In use, people found that the Zisha teapot was not only well designed but also a good choice for tea brewing. The body of the teapot could absorb some fragrance of the tea and keep it for a long time. The longer the teapot was used, the better the tea flavor. 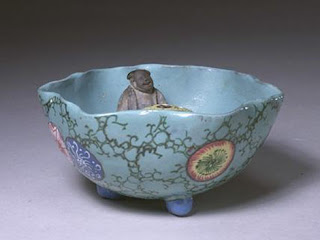 The Zisha teapot had no glaze or bright color, a plainness that fit the aesthetic views and tastes of the higher classes, helping to make the teapot prevalent all around the country. In addition, the Zisha crafts absorbed the characteristics of the bronze craft of that time and also reflected the same style of the furniture.
Focusing on practical use, the Zisha teapots in the Ming Dynasty mainly adopted geometric designs that were simple but harmonious. The rough grains of the clay highlighted the plainness as well as the elegance of the vessels. Blemishes could always be found on the surface of the vessels because of the underdeveloped techniques at that time, while the colors of the vessels were always reddish brown and purple gray due to the material used and the firing time.
From Emperor Zhengde's reign to Emperor Wanli's reign (1505-1620) in the Ming Dynasty, the masters of Zisha teapot making - such as Gong Chun, Li Zhongfen, Shi Dabin, and Xu Youquan - made great contribution to the improvement and development of the Zisha teapot techniques. 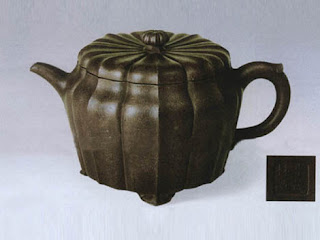