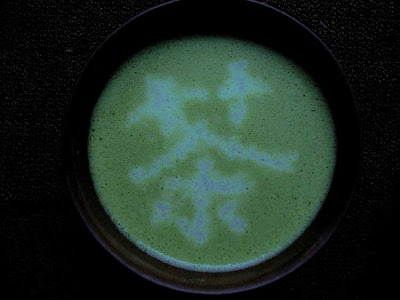 Chabaixi  originated in the Tang Dynasty. The first documentation of tea painting was found in a Tang dynasty poem, written by the poet, Liu Yuxi described in his poem, Song of Tea Tasting at Xishan Lanruo Temple,
“Pot sounds like sudden downpour and pines soughing,
white clouds filled the bowl, flowers lingering.” 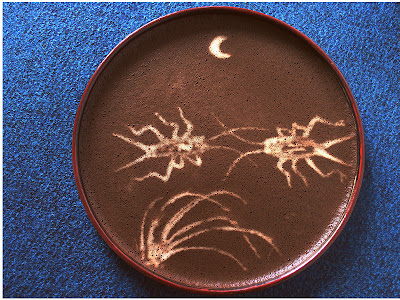 During  the Song Dynasty,the culture of China was greatly influenced by Emperor Huizong, his court officials and scholars. This is when the art of tea painting Chabaixi was perfected. Emperor Huizong wrote a book named Daguan Chalun - Treatises On Tea written in the year Daguan. here he expounded  his view and knowledge on Diancha and Fencha.the emperor also prepared tea in person for the court officials. 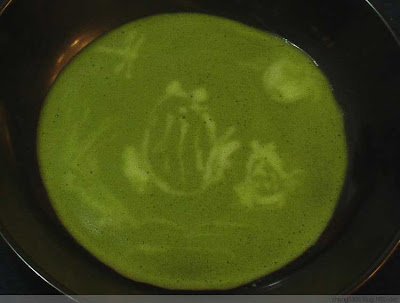 Many scholars like  Tao Gu, Lu You, Li Qingzhao, Yang Wanli, Su Shi had a pechant for the art of tea painting. They dedicated quite a few poems and articles on Chabaixi - tea painting. The poet and scholar Lu You, described the art of tea painting - fencha in his poem,
titled Spring Rain Just Stops in Lin’an -
“Leisurely I write in cursive style on a small paper piece,
watching the patterns formed in the bubble-filled tea soup beside the window.”

The practice and art of Chabaixi  gradually waned after the Yuan Dynasty. There were no documentation of on Chabaixi after the Qing Dynasty. Zhang Zhifeng, a major of tea science in Wuyishan City, recovered the ancient and precious cultural heritage in 2009 after systematical study and research.

The art of tea painting is getting a resurgence. There are tea painters that are skilled in using a spoon and utilizing special skills to stir in the tea soup to form special patterns like birds, beasts, worms, fish, flowers, grass, and Chinese characters. These are very delicate as painting, they are to be appreciated at the very instant that it is created because they dissipate quickly.
at January 05, 2013