Chabaixi is part of Chinese traditional culture.
Tea painting is therefore used to display and render the poetic beauty
and the traditional merits of the culture.
Due to the temporary nature of tea painting, the renditions are done in an impressionistic style.
This is one of the twenty four stories of Filial Piety rendered in the medium of tea soup. 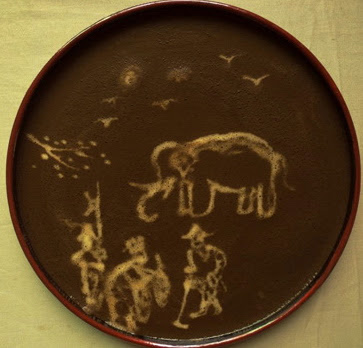 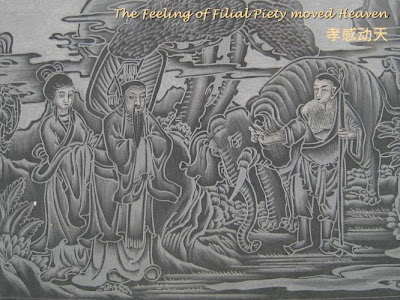 The story:
Shun was a legendary ancient emperor and one of the Five Emperors in China.
His family name was Yao. His given name was Chonghua and his courtesy name was Youyushi but he was called and known as Yu Shun in Chinese history.
According to the legend, his father Gusou (means the blind old-man), stepmother and step-brother Xiang plotted to kill him many times.
They made Shun revamp the roof of barn and while he was working on the roof,
they set fire to the barn.
Shun jumped off the roof of the burning barn and  escaped with two bamboo hats in hand. They also made Shun dig a well, but Gusou and Xiang filled the well up
with soil while he was in the well digging.
Shun then dug an underground tunnel to escape.  Shun didn't resent or get angry with his family and was still humble to his father and loved his younger brother.
His conduct of filial piety moved the heart of the King of Heaven.
When Shun would cultivate the fields for planting on Mount Li, elephants would help him. They ploughed his fields for him while birds weeded for him.
One day the Emperor Yao, heard about how Shun was a filial son and was talented in dealing with political affairs and diplomacy.
Emperor Yao married  his two daughters, Ehuang and Nvying, to Shun.
Through years of observation and tests, he selected Shun as his successor.
After Shun ascended the throne, he still called on his father respectfully, and granted him the title of Xiang (Duke).

Herds of elephants plough in the spring;
Flocks of birds pull the weeds;
He is the heir of Yáo and mounts his throne;
The spirit of filial piety moves the heart of Heaven.
at January 17, 2013