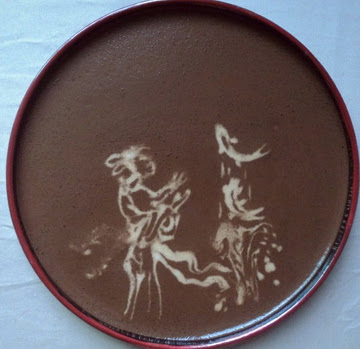 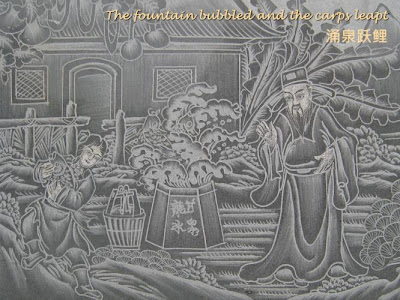 The story:
Jiang Shi lived during the Han dynasty in Sichuan.
His wife's name was Pang.
They were a pious and filial couple.
Mrs.Pang often went to fetch water from the Yangtze River that was  several miles away from their home.
Jiang Shi's mother liked to drink water from this river too.
She was also very fond of eating fish.
So, Jiang Shi and his wife often cooked fish for her.
Jiang Shi's mother did not like to eat by herself and so they invited the old lady who was her neighbour.
One day, Madam Pang went to fetch water and came back late due to strong winds blowing.
Jiang Shi mistakenly thought that she had neglected his mother.
He drove his wife out of their home.
Madam Pang lived in her neighbor's home.
She wove yarn diligently day and night to earn a living.
She would  ask her neighbor to send her earnings to her mother-in-law.
Jiang Shi's mother found out that her son had driven her out.
She ordered Jiang Shi to invite her back home.
On the day that Madam Pang returned home, spring water spurted in the courtyard suddenly and it tasted the same as the Yangtze River water.
In addition, two carps jumped out of the water every day.
Henceforth Madam Pang could offer these to her mother-in-law instead of going a long way to the riverside.

Beside the house a sweet fountain flows, and
Each morning a pair of fish appears;
The son can constantly be filial to his mother;
The daughter-in-law can be filial to her husband's mother.