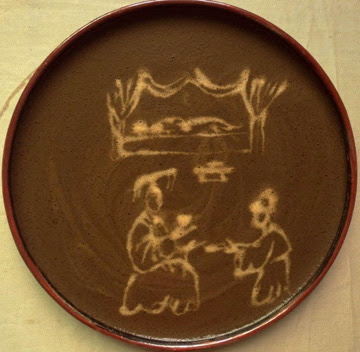 This is a Chabaixi painting.
A painting done in the medium of black tea soup.
Title of  painting : Taste the Herbal Decoction in Person 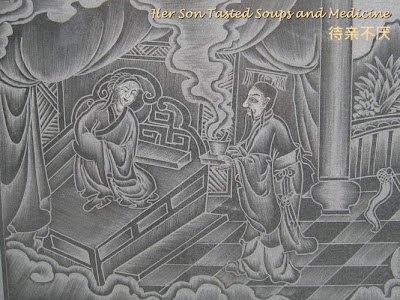 The story:
Liu Heng, Emperor Wen of the Han Dynasty was the third son of the First Emperor of the Han Dynasty and Empress Bo.
In the eighth year of Empress Bo (180 B.C.), he succeeded to the throne.
He was famous for his benevolence and filial piety.
He waited upon his mother, who was ill in bed for three years.
For the duration of her illness he often attended to her without sleep.
Before letting her drink the medicine, he always taste tested the herbal decoctions for his mother's safety.
During his reign of 24 years, he emphasized virtues that advocated etiquette and paid attention to the development of agriculture.
This made the Western Han Dynasty stable, the population flourished and the economy recovered. His reign and that of Emperor Jing of the Han Dynasty were reputed together as the "Peaceful Reigns of Emperors Wen and Jing".

Benevolence and piety are rumored through the kingdom;
Lofty and eminent he excels a hundred kings;
The Queen-Mother has been sick for three years,
And he always tastes the medicine first.