Tea Painting: She bit her fingers and pained his heart 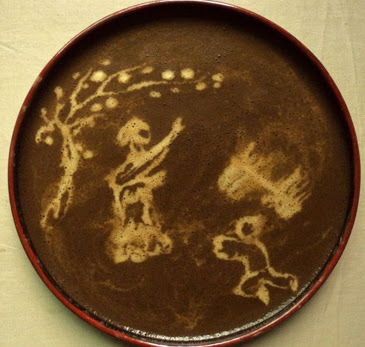 Medium: Oolong Tea soup
Title: She bit her fingers and pained his heart 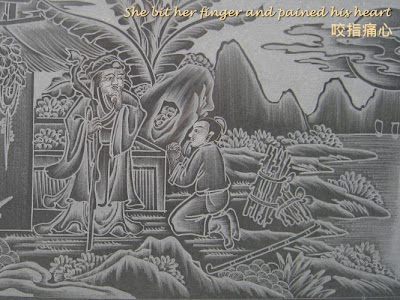 The story:
Zeng Shen, who was also known as Ziyu.
He lived in the State of Lu during the Spring and Autumn Period.
He was one of Confucius favorite disciples. He was named Zeng Tzu.
He was born in a poor family and often went into the mountains to gather firewood.
One day a guest came to the house, and his mother had made no arrangements to entertain him.
She hoped for Shen to be there, who had not returned from gathering firewood.
Then she bit her finger, drawing blood.
Suddenly Shen felt a pain in his heart. He shouldered the firewood and quickly returned home. Kneeling, he asked his mother what was the matter.
His mother said: "A guest came unexpectedly. I bit my finger to alert you."
Later, verses praised him, saying:
His mother has just bitten her finger;
When her son's heart aches uncontrollably;
He shoulders his wood to return and is not too late;
The tie between mother and child is so deep.