Tea Painting: He Wept until the Bamboo Sprouted 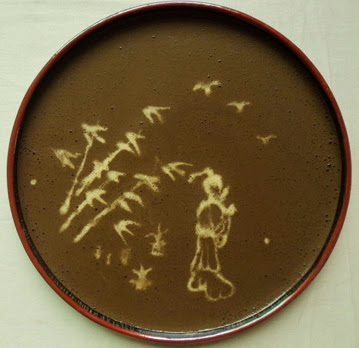 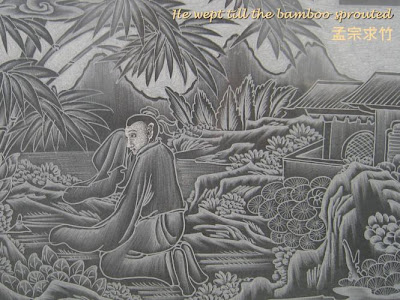 Mèng Zōng lived during the Three Kingdoms period.
His father died when he was a young child, and his mother was old and in very ill health.
One winter, the doctor told her to drink soup boiled in fresh bamboo shoots.
It was a very cold winter and there were no fresh bamboo shoots to be found.
Meng Zōng did not know what to do and he had no means to acquire fresh bamboo from the market either.
He went into the bamboo forest, weary and distraught, seizing a bamboo stalk, he wept bitterly.
Suddenly there was a loud sound that came out of the earth and there were many tender bamboo shoots that began emerging, growing out of the ground.
His filial piety  and love for his mother moved heaven and earth.
He harvested the bamboo shoots and took them home to cook the soup for his ailing mother.
Meng Zong's mother recovered from her illness.

Tears drop; the north wind is cold
And moans through a stand of bamboo;
But winter bamboo shoots come forth!
The wish of Heaven is to bring harmony.