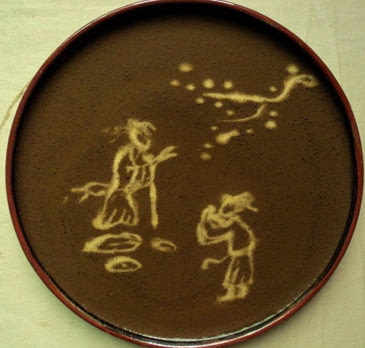 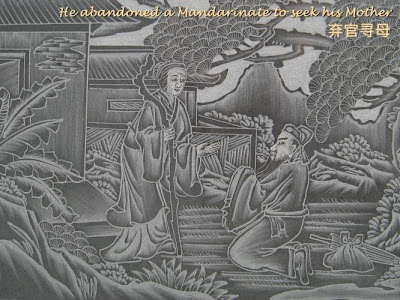 The story:
Zhu Shouchang was born in Tianchang in the Song Dynasty.
When he was seven years old, his birth mother Madam Liu, who was a concubine, was envied by Zhu Souchang's father's first wife.
His step-mother arranged and forced madam Liu to another man.
This marriage separated mother and son for 50 years.
During the reign of Emperor Shenzong [1068-1085], Zhu Shouchang became an official in the imperial court.
He looked for his mother, vowing to never give up until he found her.
He wrote a sutra in blood and went around seeking his mother.
One day he got a clue of his mother's whereabouts.
He resigned from his post and went to Shaanxi to find her.
He finally met his biological mother and two younger brothers in Tongzhou (in Shanxi).
They had a happy reunion and returned home together. His mother was already over 70 years old at that time.
Chinese poetry praises his deed:
At seven he was separated from his mother,
And fifty years have passed;
One morning they meet again,
And the joy of it moves Heaven.
at January 31, 2013