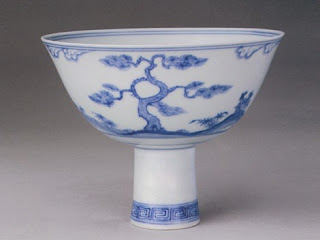 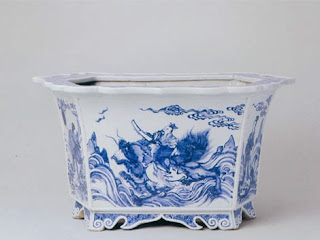 The Yuan Dynasty is a key period for the development of the firing techniques for blue-white porcelain in China. Its unique characteristics were based on the techniques of former dynasties. Blue-white porcelain had become a major porcelain product in China by the Ming (1368-1644) and Qing dynasties (1644-1911).
Blue-white porcelain of the Yuan Dynasty is large, with a thick roughcast. Generally, the works include big bottles, pots, bowls and plates, with the traditional flavor of the Tang (618-907) and Song (960-1279) dynasties. Due to the underdeveloped techniques, there are two interfaces on the body and several veins inside the body. The roughcast is not as smooth as that of the Ming and Qing dynasties and the glaze is thicker due to more iron in the raw glaze materials. 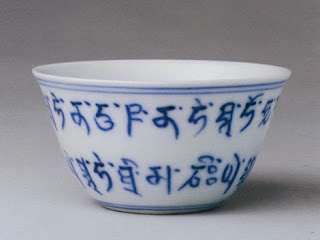 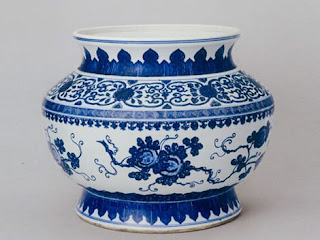 Blue-white porcelain actually belongs to color-glazed porcelain and the coloring agent used is called cobalt oxide. First, using cobalt oxide, paint the unbaked mould, then apply a layer of translucent glaze over it and bake it at 1,300 degrees Celsius. The cobalt oxide will be reduced under the high temperature into a blue hue, which will be very bright and durable without poisonous lead. Each piece of monochrome-glazed porcelain has a single bright color with an exquisite design. A very good mastery of controlling temperature changes and content composition is required. Blue-white porcelain is most famous among the four traditional types of porcelain produced in Jiangdezhen, and is renowned as the "ever-lasting blue flower."
In 1979 Jingdezhen blue-white porcelain won a national golden prize and in 1985 it was honored with three gold medals at international fairs held in Leipzig, Brno, etc. Since then, the name "Jingdezhen Blue-white Porcelain" has spread far and wide. By far, it is a top product in the porcelain business, boasting the most prizes and highest standards.
By Explore Cultural China
at May 19, 2012