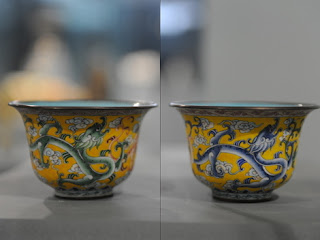 The enamelware manufacturing craft is actually a complex process combining enamel process and metal process. It is prepared by first grinding quartz, silicon, feldspar, borax and some metal minerals into powder and then melting, and then applying on metal utensils to form a surface after baking. Sometimes polishing or gold-plating is needed. Enamelware which has the sturdiness of metal, the smoothness and corrosion-resistance of glass, is practical and beautiful. To date the earliest enamel object made in China is the Tang-dynasty gold-inlaid silver-base enamel mirror now kept in the Shosoin Repository of Nara, Japan. But no other enamelware was found in the three or four hundred years afterwards. In the late years of the Yuan Dynasty, Chinese enamelware became less influenced by Arabian culture and more and more nationalized. 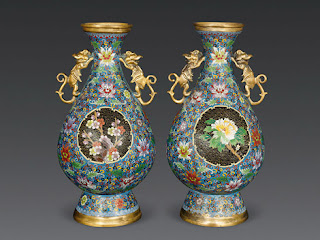 Enamelware includes gold-inlay enamel, coating enamel, painting enamel in terms of processing methods, and gold-base enamel, copper-base enamel, porcelain-base enamel, glass-base enamel, purple-clay enamel, etc. in terms of bases. Among them the copper-base enamel is the most popular, because the copper price is relatively lower, and enamel is easier to adhere to the copper surface. The distinguished traditional Chinese handicraft Jingtailan (cloisonné enamel), its scientific name being copper background wire-inlay enamel, got its name from being made in large quantities in Beijing during the Jingtai Reign of the Ming Dynasty, and the enamel used was mostly of a blue color. The procedure of Jingtailan includes chiefly base-making, wire-inlaying, firing and soldering, blue enamel coating, enamel-baking, polishing, and gold-plating. Coating is done by using small iron spade or glass tube to apply glaze of different colors first on the background, then on the designs and ten finally to apply the blue glaze and add some shiny white substance. Glazing and baking procedure is done repeatedly, one blazing followed by one baking, often three times are needed for quality cloisonné. 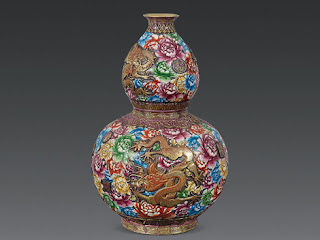 Promoted and propped up by the Qing government, the enamel handicraft grew fast in the Qing Dynasty based on the achievements attained during the Yuan and Ming dynasties. In the reign of Emperor Kangxi, and enamel factory was set up in the court, making wire-inlay enamel and base-engraving enamel at first, and then making painted enamel successfully on a tentative basis. Painted enamel which often applies on small objects is heavy and thick in color, similar to the mixed glaze in earlier time. Porcelain-base enamel, also called enameled color porcelain, is to apply enamel paint on porcelain base. It is a perfect combination of porcelain and painted enamel craft. In the reign of Emperor Qianlong, painted enamel craft was booming. Aside from the court, Guangzhou was the major place of painted enamel making. The painted enamel works made in court featured neat design, meticulous painting, and elevated style, using mostly bright yellow color that is rich in royal flavor. Painted enamel works make in Guangzhou have bold and unstrained lines, decorated with European-style roll-up leaves design using glaze material imported from western countries that is gorgeous in color and sparkling in luster. At that time, snuff bottles of diversified types meticulously produced showed up. They were produced combining enamel, jade, agate, crystal, and porcelain with calligraphic and drawing art. Even western subject matters such as European women and babies, westerns styled pavilions and towers, etc. were adopted for designs, which were rarely seen in previous dynasties.
source: Chinese Arts & Crafts, published by China International Press
By Explore Cultural China
at May 27, 2012